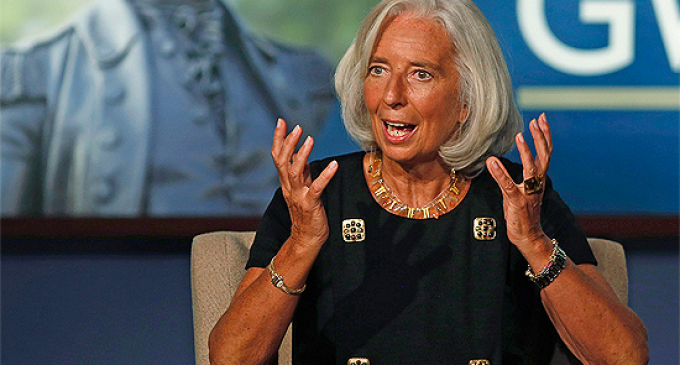 The IMF (International Monetary Fund) goes into countries, coaxes them into debt, then maintains a stranglehold on their economies like a parasite.

Now, it says that Americans should be taxed, up to 71%, to help the poorer countries of the world to help redistribute the wealth.

Of course, the IMF is run by the same bankers that have ruined the world's economy.

Right out of the Marxist playbook, they create a problem, then offer a solution that is actually a disguise of their original agenda.

The IMF just dropped another bombshell.

After it recently suggested a “one-off capital levy” – a one-time tax on private wealth as an exceptional measure to restore debt sustainability across insolvent countries – it has now called for “revenue-maximizing top income tax rates”.

The IMF’s team of monkeys has been working around the clock on this one, figuring that developed nations can increase their overall tax revenue by increasing tax rates.

They’ve singled out the US, suggesting that the US government could maximize its tax revenue by increasing tax brackets to as high as 71%.

Coming from one of the grand wizards of the global financial system, this might be the clearest sign yet that the whole house of cards is dangerously close to being swept away.

Think about it– solvent governments with healthy economies don’t go looking to steal 71% of people’s wealth. They’re raising this point because these governments are desperate. And flat broke.

The ratio of public debt to GDP across advanced economies will reach a historic peak of 110% next year, compared to 75% in 2007.

That’s a staggering increase. Most of the ‘wealithest’ nations in the West now have to borrow money just to pay interest on the money they’ve already borrowed.

This is why we can only expect more financial repression from desperate governments and established institutions.

And that’s only the financial aspect; the deterioration of our freedom and liberty will continue at an accelerated pace.

Can a person still be considered “free” when 71% of what s/he earns is taken away at the point of a gun by a bankrupt, bullying government? Or are you merely a serf then, existing only to feed the system?

This is why we often stress having a global outlook and considering all options that are on the table.

Because the other side of the coin is that while some countries are tightening the screws and making life more difficult, others are taking a different approach.

Whether out of necessity or because they recognize the trend, many nations around the world are launching new programs to attract international talent and capital.

I’ve mentioned a few of these already– economic citizenship programs in places like Cyprus, Malta, and Antigua (I met a lot of these programs’ principals at a recent global citizenship conference that I spoke at in Miami).

Then there are places like Chile and Colombia which have great programs for entrepreneurs and investors. Other places like Georgia and Panama have opened their doors to nearly all foreigners for residency.

The era we’re living in– that of global communications and modern transport– means that you can live in one place, your money can live somewhere else, and you can generate your income in a third location.

Your savings and livelihood need not be enslaved by corrupt politicians bent on stealing your wealth… all to keep their destructive party going just a little bit longer.

The world can truly be your playground. You just need to know the rules of the game.