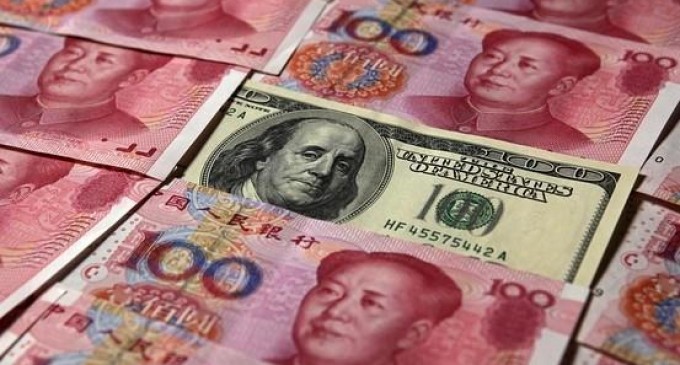 For the first time since the end of the 19th century America is not the leading economic power on the planet.

We've gone from the top creditor nation on the plant to the top debtor nation in just 20 short years.

As recently as 2000, we produced nearly three times as much as the Chinese.

To put the numbers slightly differently, China now accounts for 16.5% of the global economy when measured in real purchasing-power terms, compared with 16.3% for the U.S.

This latest economic earthquake follows the development last year when China surpassed the U.S. for the first time in terms of global trade.

I reported on this looming development over two years ago, but the moment came sooner than I or anyone else had predicted. China’s recent decision to bring gross domestic product calculations in line with international standards has revealed activity that had previously gone uncounted.

Hear how China’s Sina Weibo microblog makes you money, watch how your fingertips could give you access to your health records and check out top five games for holiday gifts.

These calculations are based on a well-established and widely used economic measure known as purchasing-power parity (or PPP), which measures the actual output as opposed to fluctuations in exchange rates. So a Starbucks venti Frappucino served in Beijing counts the same as a venti Frappucino served in Minneapolis, regardless of what happens to be going on among foreign-exchange traders.

Make no mistake. This is a geopolitical earthquake with a high reading on the Richter scale.

PPP is the real way of comparing economies. It is one reported by the IMF and was, for example, the one used by McKinsey & Co. consultants back in the 1990s when they undertook a study of economic productivity on behalf of the British government.

Yes, when you look at mere international exchange rates, the U.S. economy remains bigger than that of China, allegedly by almost 70%. But such measures, although they are widely followed, are largely meaningless. Does the U.S. economy really shrink if the dollar falls 10% on international currency markets? Does the recent plunge in the yen mean the Japanese economy is vanishing before our eyes?

Back in 2012, when I first reported on these figures, the IMF tried to challenge the importance of PPP. I was not surprised. It is not in anyone’s interest at the IMF that people in the Western world start focusing too much on the sheer extent of China’s power. But the PPP data come from the IMF, not from me. And it is noteworthy that when the IMF’s official World Economic Outlook compares countries by their share of world output, it does so using PPP.

Yes, all statistics are open to various quibbles. It is perfectly possible China’s latest numbers overstate output — or understate them. That may also be true of U.S. GDP figures. But the IMF data are the best we have.

Make no mistake: This is a geopolitical earthquake with a high reading on the Richter scale. Throughout history, political and military power have always depended on economic power. Britain was the workshop of the world before she ruled the waves. And it was Britain’s relative economic decline that preceded the collapse of her power. And it was a similar story with previous hegemonic powers such as France and Spain.

This will not change anything tomorrow or next week, but it will change almost everything in the longer term. We have lived in a world dominated by the U.S. since at least 1945 and, in many ways, since the late 19th century. And we have lived for 200 years — since the Battle of Waterloo in 1815 — in a world dominated by two reasonably democratic, constitutional countries in Great Britain and the U.S.A. For all their flaws, the two countries have been in the vanguard worldwide in terms of civil liberties, democratic processes and constitutional rights.