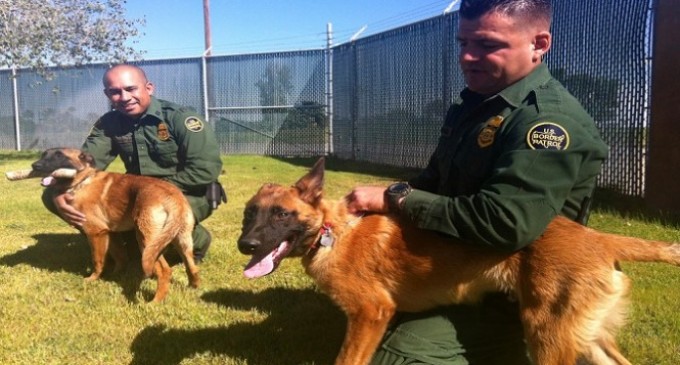 Marino-Najera was found slumbering beneath a tree with a few criminal associates after a hard day's work smuggling drugs across the border for the drug cartel. They were awakened by the border patrol dogs sniffing at the large bag of marijuana they were smuggling, and biting down on Marino-Najera's hand.

Marino-Najera claims a Border Patrol dog was “mauling” his hand as he woke up and saw the agents. The illegal immigrant alleges that the U.S. Border Patrol agents ignored his cries and shouts for help, allowing the dog to “tear apart” his hands for “several minutes.” According to the lawsuit claims by the illegal alien, the Border Patrol agents did not call off the dog until they walked over to arrest him.

Bill Riser, the illegal immigrant’s attorney, maintains that Jose Manuel Marino-Najera is entitled to sue the Border Patrol and the federal government because the alleged injuries occurred on American soil. During a very adversarial interview with Fox News’ Neil Cavuto, Bill Riser said that the illegal act of coming into America, coupled with the drug mule activity, has no bearing on his client’s standing to file a lawsuit against the Border Patrol.

Cavuto, appearing more than a bit flabbergasted during the exchange with Bill Riser over the illegal immigrant lawsuit, asked, “If I break into your house and fall and hurt my foot because I tripped over something while going to steal jewelry in an upstairs bedroom, can I sue you for my injuries?” Bill Riser told him no, he could not sue for any injury incurred during the commission of a crime. Cavuto pressed the point further, maintaining that suing for injury which happened during the commission of a crime is exactly what the Jose Manuel Marino-Najera Border Patrol lawsuit seeks to accomplish. Riser continued to disagree.