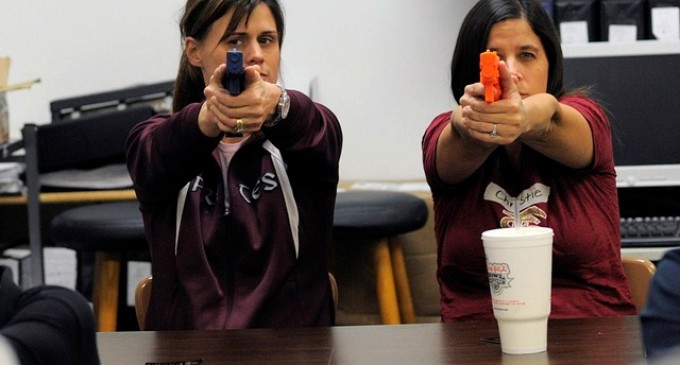 On the heels of a judge’s ruling that the Chicago gun ban is illegal, Illinois residents are  applying for conceal carry permits at an incredible rate.

On Sunday alone, 4,525 people who live in Chicago applied for a concealed carry permit. Compare that with 7,043 Illinoisans that registered for Obamacare 2 months after it’s launch.

Of course, Chicago ranks the highest in gun violence in the nation and many people are undoubtedly obtaining a permit for protection against criminals.

But one has to wonder if Americans as a whole are not actually awake to the tyranny that has taken over our government when you look at the number of applications compared with the number of Obamacare enrollments.

And for all you gun control advocates…watch and learn!  Once the citizens of Chicago are armed with their conceal carry permits, gun violence will drop off markedly in Chicago.

On the heels of a federal court striking down Chicago’s ban on gun sales, those seeking gun permits in Illinois flooded the State Police website over the weekend to begin the permitting process.

In fact, the amount of Illinois residents seeking a conceal carry permit already surpasses those who enrolled in Obamacare after the first two months of the launch of healthcare.gov. The Chicago Sun-Times reported 4,525 individuals signed up on Sunday alone for their firearms permits, when the State Police first opened the process to all concealed carry applicants.

Illinois State Police spokeswoman Monique Bond said that number is included in Sunday’s total of more than 11,000 people who have signed up because of an early application process that began December 18 and was open to only firearm instructors. Officials told the Sun-Times they expect 350,000 to 400,000 people (about 1,000 per day) will sign up for conceal carry firearm permits this year.

“So far, we’re pleased with the process,” Bond said. “The early application process allowed us to work out several issues.”

Illinois State Police have up to 90 days to approve or reject applicants if their applications are completed and their fingerprints are submitted in an electronic format. Illinois became the last state to pass legislation allowing residents to carry concealed weapons. The five-year permits cost $150 for residents and $300 for non-residents.

In contrast, the number of Illinois residents going to healthcare.gov over a two-month period and enrolling in Obamacare is currently on a slower pace than those looking to become conceal carry permit holders. Only 7,043 Illinoisans were enrolled in Obamacare plans two months after the website’s launch, the Chicago Tribune reported in December.

Additionally, reports say that in the same month, Illinois officials told 30,000 residents who applied at healthcare.gov to re-do their applications, as applicants were denied private coverage and the government mistakenly referred them to Medicaid. The issue has yet to be resolved.