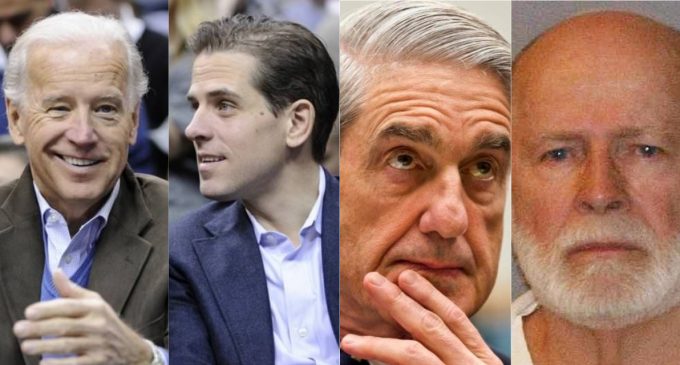 The connections between former vice president Joe Biden, his son Hunter, Robert Mueller and an infamous mob boss are peculiar, to say the least.

In 2014, Hunter Biden was thrown out of the Navy for blowing cocaine up his nose, although he tested positive in 2013. Also in 2013, then-Vice President Joe Biden Hunter flew aboard Air Force Two to China. It's unclear if the test came before the trip.

Hunter Biden’s firm inked a $1 billion private equity deal, later expanded to 1.5 billion, with a subsidiary of the Chinese government’s Bank of China. Shortly after being kicked out of the Navy, Hunter was banking $50,000 a month.

Biden said, “Rudy Giuliani, it’s hard for me to comment on Rudy Giuliani. I don’t think I will because my Irish may come up. It is a personal attack. I expect that from Rudy Giuliani and the president. It’s not been one scintilla of evidence that my son ever interfered, ever asked me anything, that I ever got involved in anything other than doing the job I was supposed to do, or that he ever contacted anybody in the American government. So I’m proud of him. I think it’s the way these guys play.”

Now the controversy widens as it's come to light that Hunter partnered with infamous mobster Whitey Bulger's nephew. Turn the page for details.