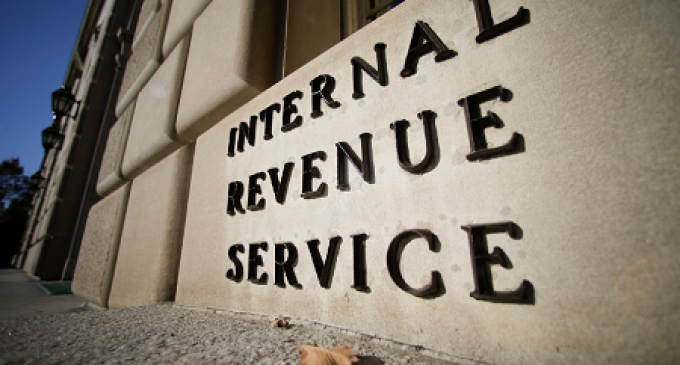 In response to the IRS targeting of conservative groups, the House has imposed a ‘harsh' penalty of a 15% budget cut – ‘harsh' being a mainstream media adjective.

So the IRS engages in an completely despotic act that would make any totalitarian regime proud, so they lose some money…which they will surely come after Americans for. If you think they will accept ANY loss you're kidding yourself.

And, this completely corrupt entity is actively – and obviously – engaging in a completely cover up of their criminal actions.

Instead of the minor slap on the wrist, this agency should simply be abolished.

Should it even exist in the first place?

The 16th Amendment, which gave us this wonderfully corrupt and suppressive agency, doesn't seem to have been fully ratified by a majority of the states:

“If you…examined [The 16th Amendment] carefully, you would find that a sufficient number of states never ratified that amendment.” – U.S. District Court Judge James C. Fox 2003.

What the IRS website and the Government in general refuse to recognize is that the Sixteenth Amendment to the Constitution of the United States was never ratified by a majority of the States. Only two or less States properly ratified the proposed Amendment. In February 1913 Secretary of State Knox falsely declared the 16th Amendment ratified and the government has been unlawfully demanding taxes ever since.

The 16th Amendment allegedly entitled the government to collect uneven taxes. The U.S. Constitution does not preclude taxation it dictates that tax be uniform for everyone, except Indians, and apportioned equally across all the States:

Article I, Section 2: “..Representatives and direct Taxes shall be apportioned among the several States which may be included within this Union, according to their respective Numbers, which shall be determined by adding to the whole Number of free Persons, including those bound to Service for a Term of Years, and excluding Indians not taxed, three fifths of all other Persons. The actual Enumeration shall be made within three Years after the first Meeting of the Congress of the United States, and within every subsequent Term of ten Years, in such Manner as they shall by Law direct.”

The 16th Amendment is claimed by the federal government in the federal territory of Washington, D.C. to authorize their private collection company, the IRS, to collect “income tax”. However if the 16th was not properly ratified the IRS has no legal authority to collect tax. The same applies to local County and State tax collectors who are also bound by the U.S. Constitution.

After an exhaustive year long search of legislative records in 48 sovereign States conducted by Bill Benson, (Alaska & Hawaii were not admitted into the Union until after 1913). the only record of the 16th Amendment ever having been confirmed was a fraudulent proclamation made by the Secretary of State Philander Knox on February 25, 1913, wherein he simply declared it to be “in effect”, but never stated that it was lawfully ratified. Bill Benson's has an excellent website, support him: The Law That Never Was