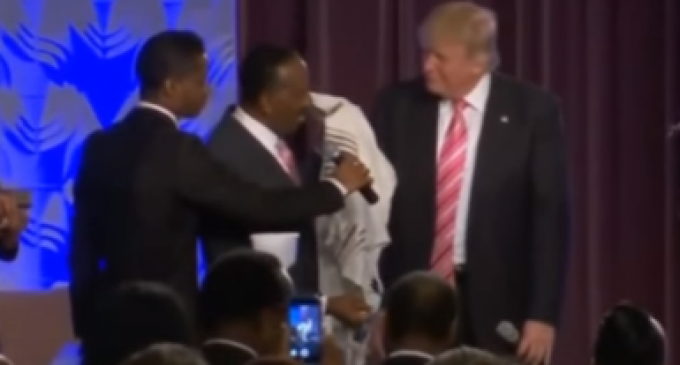 The liberal media is up to their old tricks again. Anybody who thinks that the media coverage of Donald Trump's campaign has been “fair” is either blind or so morally corrupt that the word has a completely different definition to them then it does to everybody else. This time, however, instead of calling Trump names and posting nude photos of his wife on the front page of every news outlet in the country, they censored one of his events all together.

Because this particular event would have proven the liberal rhetoric wrong and made Reuters and several other outlets look like the misleadings fools they are. This time, they can't deny it because not only did several Americans witness it, but it's also been caught on tape.

The incident occurred in Detroit this week as African-American Bishop Wayne T. Jackson presented Trump with a shawl, a Bible and offered his prayers while a black audience cheered and clapped in the background.

But wait, Trump is racist, right? That's where things get interesting.

Unable to use the footage to push their agenda, Reuters told the camera crew who had been sent to cover the event to cut the feed, causing it black out right after Trump was handed the Bible. Interesting, right?

Watch it take place in a video on the next page.