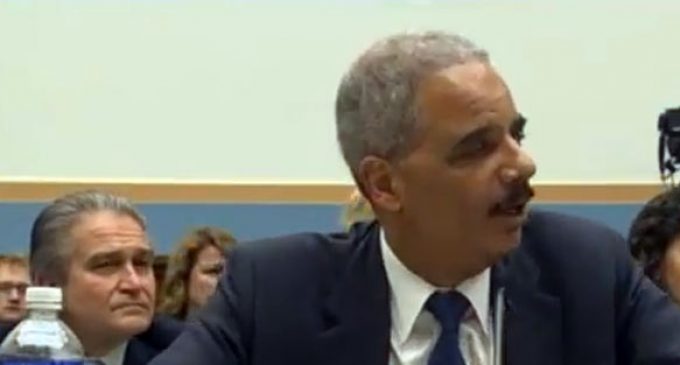 Rep. Louie Gohmert (R-Texas) ruffled the feathers of U.S. Attorney General Eric Holder when he suggested contempt (of Congress) was “not a big deal” to Holder. Holder responded, “You don’t want to go there, buddy. You don't want to go there, okay?”

In fact, Holder is doing exactly what Gohmert claims: showing contempt for Congress, but just don't point it out in public or he'll get irate.

At issue was a request for documents in the DOJ’s case against the Holy Land Foundation, a designated terrorist group based in Texas, whose founders were convicted and sentenced for funneling money to Hamas.

The men are now asking for a new trial, blaming their lawyers for their convictions. In February, the DOJ disputed their attorney’s claim, saying there was a “mountain of evidence” that proves the Islamic charity was controlled by Hamas.

“I was fairly specific to make sure that I got the documents that the Department of Justice handed over to people convicted of supporting terrorism. They’re terrorists. We’ve given them the documents,” Gohmert said.

Gohmert said the committee sent the Justice Department repeated requests for the documents that had been used to prosecute them but were only provided a link to “nearly 500 publicly available exhibits that were admitted into evidence” and instructed “to check the public access to court electronic records.”

Meanwhile, the requested documents were “put on discs and sent to Illinois,” so they are easily available – “just not to members of Congress,” Gohmert said.

“Attorney General, I’ve read in the 5th Circuit opinion, about 9600 summaries of transcripts of conversations that the Justice Department had that were made available to attorneys for the terrorists,” Gohmert said. “I still do not understand why your department can provide documents to terrorists’ lawyers, and many of them to four out of eight of the terrorists, and not provide them to members of Congress.”

“Sir, I’ve read you what your department promised, and it is inadequate, and I realize that contempt is not a big deal to our attorney general, but it is important that we have proper oversight,” Gohmert said.