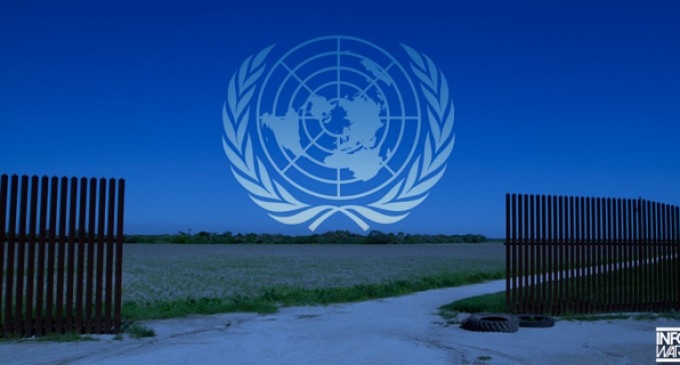 According to radio host Dave Hodges, 2 anonymous border patrol agents told him that the UN has taken charge of the US border after labeling the illegal immigrants as ‘refugees'.

The UN is said to be working with DHS and knowingly transporting members from the notorious gang MS-13 to various locations the US because the gang members are ‘just like everyone else'.

“I objected to admitting MS-13 gangsters into the U.S. and I was told that we have our orders to treat them like anyone else,” an agent told Hodges. “He recounted the fact that MS-13 operatives will have a tattoo with tears on their face which represents a person that they have murdered in the commission of their drug related duties,” Hodges reported. “He said he processed an MS-13 member who had nine tears on his face and he was told to process him as an ‘unaccompanied juvenile refugee.’”

And police officers are already encountering these gang members, such as the La Grulla, Texas, officer who pulled over a vehicle last week carrying an aggressive MS-13 member.

“Once I asked him to lift up his shirt, that’s where I observed he had MS-13 tattooed on his chest and his back,” the officer stated. “Those are really dangerous subjects.”

The U.N., however, has already announced its intent to broadly designate illegal aliens, including MS-13 members from Central America, as “refugees.”

“Representatives of the United Nations High Commissioner for Refugees, or UNHRC, are ‘intensely discussing in meetings’ the possibility of extending U.N. protection to the thousands of Central Americans crossing the U.S. border with Mexico illegally by defining them as ‘refugees’ who are seeking asylum from political and domestic violence in their home nations,” Jerome Corsi reported on July 14 for World Net Daily.

An informed source also told Infowars the U.N. is already calling illegals “refugees” and pro-amnesty organizations are likewise doing so even though Latin America has experienced extreme violence for the past 10 years and the massive influx of illegals has only occurred in the past few months.

In June, for example, several activists who were guests on NPR described all the illegal immigrant youth entering the U.S. in record numbers as desperate “war refugees” who need the full support of the government.

Of course, that’s obviously not the case if the U.N. is helping to import MS-13 gang members into the U.S., but U.N. representatives will still call them “refugees” if it allows the globalist organization to infringe upon America’s national sovereignty.