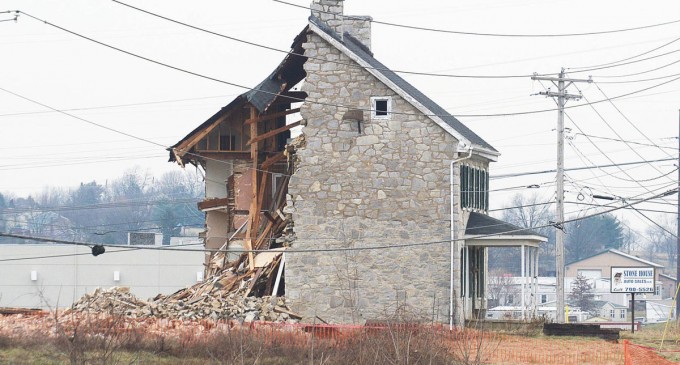 In Silver Spring Township, Pennsylvania, an old stone house was slated for demolition. In fact, on January 6th demolition was begun, but stopped when a local resident did some digging at the Cumberland County Historical Society and found that the house had some tremendous historical value.

Built in 1780, the structure was christened the James Bell Tavern, and it is recognized as the site where a meeting was held objecting to the ratification of the U.S. Constitution, due to the feeling that the Constitution was too centralized. A meeting was held on July 3, 1788 which led to the development of documents that ended up being the Bill of Rights.

The fate of the stone house was almost sealed, in large part because most people in the surrounding area had no idea of the importance of the building. For now the demolition has been halted, but the sleuthing  is fascinating, and the idea of the home of the Bill of Rights being torn down is certainly a metaphor for what is happening in politics today.

If Silver Spring Township officials and a local real estate developer didn’t know that an old stone house on Route 11 is the reputed birthplace of the U.S. Bill of Rights before they started demolition there last week, they definitely know now.

On Jan. 6, workers began demolishing a two-story stone house at 7086 Carlisle Pike in Silver Spring Township that most recently was the site of Stone House Auto Sales.

This just isn’t any stone house, however. Built in 1780 as the James Bell Tavern, the structure hosted the Stony Ridge Convention on July 3, 1788, a meeting of Anti-Federalists opposed to ratification of U.S. Constitution, which led to amending the document with the Bill of Rights.

Triple Crown Corporation, the property’s owner, legally obtained a permit from the township for the demolition, according to Christine Musser, a member of the township’s Conservation and Preservation Committee.

Musser said she was informed about the stone house’s history by an “outside source.” After “doing some digging” about the matter at the Cumberland County Historical Society, she alerted township officials about the matter.

Demolition of the historic structure was “put on hold” and discontinued on Jan. 7, Musser said. To her estimation, about a third of the building was demolished during the initial process.

“Triple Crown apparently had no clue of the building’s historical significance. It was an oversight,” Musser stated.

“Late Wednesday, January 6, township staff became aware that demolition of a building later identified as the Bell Tavern had begun by Triple Crown Corporation,” Silver Spring Township officials said in a news release issued Thursday. “Township staff issued a stop-work order on the demolition, and the developer complied. By that time, a portion of the building had been demolished. The stop-work order allowed us to assess the situation and whether the developer was in compliance with our ordinances.”