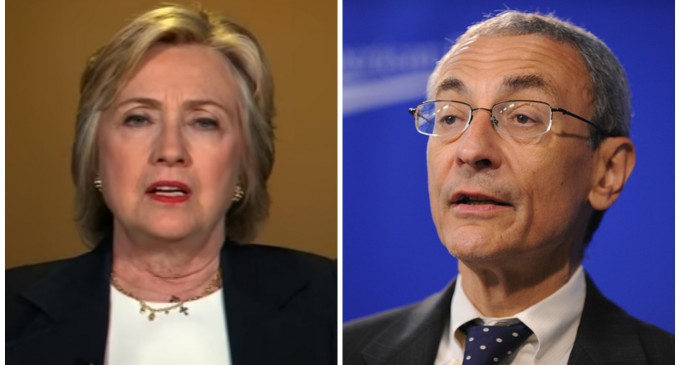 It is shocking how big money drives Hillary Clinton and many of her cohorts to do dangerous and foolhardy things. We have reported previously on the Clinton Foundation that has several individuals with criminal records on the board (these folks used to be called FOB or Friends of Bill, we can now assume they are called FOH). Why in the world would someone who has been plotting to capture the presidency for years surround herself with criminals? Unless they know the tricks of the trade and are useful helpers for enriching the Clintons. For example, it is estimated the Clinton Foundation has collected over $2 billion, yet only 10% – 15% has actually been spent on charitable activities. Now that is a criminal enterprise.

One of the more disreputable people Clinton has worked with is John Podesta, who is now her campaign chairman. He was so seedy and questionable that even Barack Obama would not allow Clinton to have Podesta on her staff because of his well-known ethical and legal lapses, which is saying something in Washington. So she helped him work in other capacities that were equally dirty, and it now seems some of his activities finally are seeing the light of day. It does not look good. And it blows back on Clinton, who seems to have been playing footsie with the Russians, with Podesta as her lackey, right in the middle of the shenanigans.

Podesta Forgets to Disclose Income from the Russians, page 2: