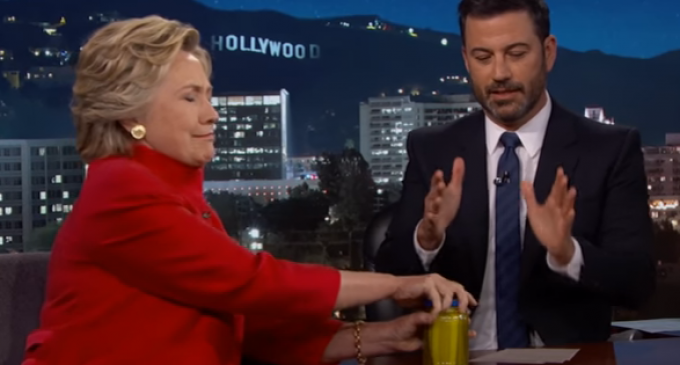 If there's one thing that Hillary Clinton has proven time and time again during her political career, it's that she can't be trusted. You have a better chance of surviving a swim with sharks while covered in paper cuts than you do of getting the truth out of Hillary's mouth. And yes, everybody lies, but not everybody gets people killed and endangers the lives of Americans when they lie. Her latest scandals, the Benghazi incident and the email servers are proof of that claim.

Now she's trying to dismiss claims that she's sick, despite the photographic evidence of her handler not only holding a Diazepam pen but also using it on her when she's appearing to have a stroke. Various sources around the Internet and the media have been trying to debunk these rumors. Even television host Jimmy Kimmel has had a go at it.

Monday night on “Jimmy Kimmel Live” Hillary stopped by the studio and answered some questions about her health. Apparently opening a jar of pickles proves she's not sick.