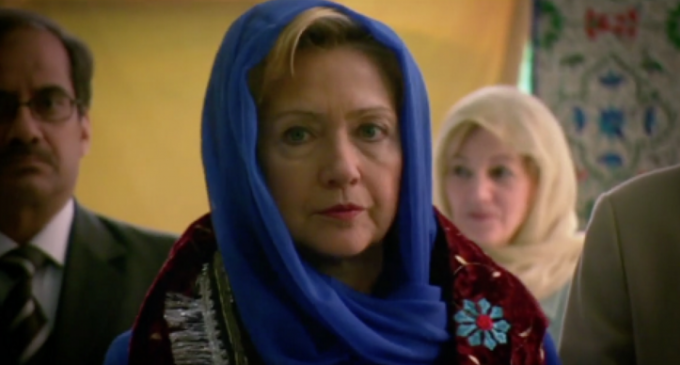 Is there a term for someone who won't just shut up?  Is “un-shut-uppable” a word?  I'm really starting to wonder if Hillary and Obama are un-shut-uppable.  I'm beginning to think that the disease of diarrhea of the mouth afflicts both of these poor Leftist creatures who just seem incapable of understanding that the echo chamber of Washington and the Socialist state of the world are a very tiny, minute portion of the global population and really, quite frankly, don't give a jack's ass what you're blathering on about.  And being a card-carrying Liberal in the Party of the Jackass doesn't change the fact that you are not relevant, you're certainly not “young and hip,” and you're not as knowledgeable about the world as you would like to believe.

I traveled extensively myself abroad, for many years, and I have a very different take on what Europeans believe about us and the rest of this Socialist outlook on the world.  Of course, I didn't travel in the same closed walls circles as Mrs. Clinton.  She had the glamor and the $10K-per-plate dinners in the homes of ambassadors, world leaders and commerce secretaries while I was a lowly service member in the United States Army traveling from one foreign military base to the next and sidling up to Germans, Brits, Spaniards, Dutchmen, Greeks, Italians, Danes, Swedes, Austrians (they speak German, Mr. Obama) Frenchmen (well, maybe not Frenchmen), Poles, and even Russians (RUN!) at nightclub bars and in taverns all over Europe and talked with them as normal human beings.  I wasn't a politician of the world looking for a photo-op or a soundbite to put on my website.

The one thing that was true with all of these people in all these different cultures was that they were just like us.  They had different food, different ways of greeting each other, and different methods of education, driving, or traveling, but they all had to work hard to pay their bills, their taxes, and all hated their butt-kissing and deceitful politicians and country leaders.  One of the best jokes I ever heard was from a Greek in a small village on the Isle of Crete in Chania.  In broken English, he told me the joke and it translated over perfectly from Greek, its meaning intact and its humor wonderfully symbolic of the way Europeans view Americans.

To read the awesome joke and more about how Hillary believes she is just SOOO much smarter than all of you, turn to the next page.  Trust me, the joke is worth it…