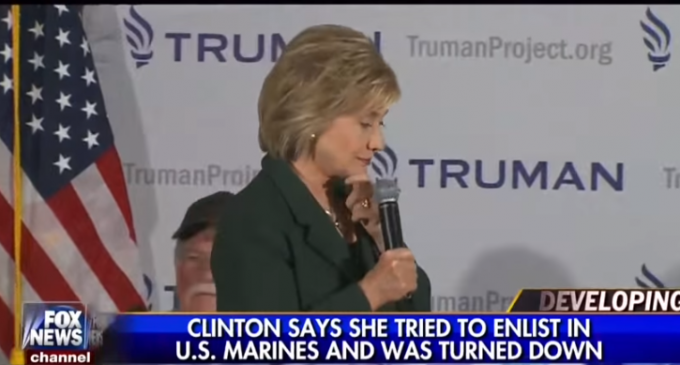 Hillary Clinton has re-introduced a story into the press that she wants no one to vet.  Or re-vet.  Clinton, in a story telling frame of mind, dragged out a story she first told in 1994.  The story, which details an anecdotal incident is again being circulated showing her lack of veracity.

Clinton lightheartedly tells the story of the time she went in to join the Marines in 1975.  At 26 years old, Clinton, who was about to marry Bill Clinton, was an up and coming lawyer marrying an up and coming political figure.  The thought that Hillary would be wanting to join the Marines at that time in her life is suspect.  Yet, Hillary has her backers, who will vaguely confirm the story.

Still, at issue aside from the logic behind such a move, has become taking it at face value.  The Hillary campaign states “Ms. Clinton wanted to serve her country”, the backers state “Hillary was out to see how a female fared at a Marine recruitment site”.

A story made up of whole cloth?  And if it can finally be put to rest that she did make it up out of whole cloth, why is that important?

more on Hillary's stint at becoming a Marine next page