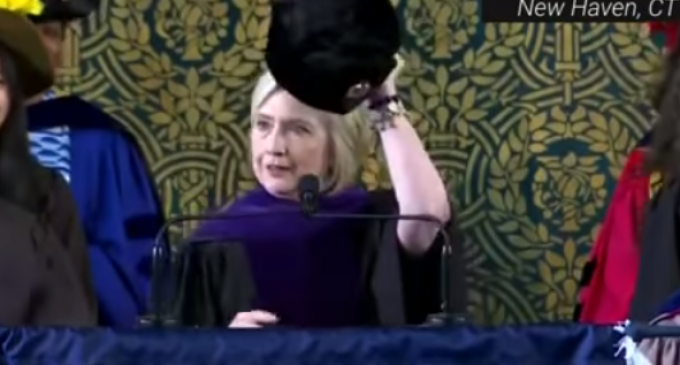 Hillary Clinton surfaced this past weekend to remind everyone once again that they made the right choice in electing Donald Trump to the presidency.

While speaking as part of Yale University's graduation events this past weekend, Clinton topped off her indignant remarks by pulling out a Russia fur hat out.

“Now, I see looking out at you that you are following the tradition of over-the-top-hats,” Clinton told the graduates as a segue, “So I brought a hat, too. A Russian hat.”

The crowd cheered Hillary's temper tantrum on as she hinted at Russian campaign interference, “Look I mean — if you can't 'em, join 'em.”

She then lashed out at students in the guise of a joke about losing Michigan in 2016, “I am thrilled for all of you — even the three of you who live in Michigan and didn't request your absentee ballots in time,” she said, drawing laughter.