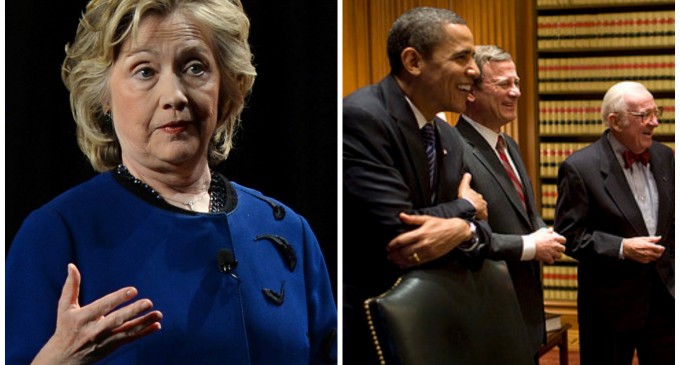 “Change We Can Believe In”

Yes we can… elect President Obama for life.

That last one was once relegated to communist fantasies and dark web conspiracy sites.

Now, Hillary Clinton is willing to offer a Supreme Court of the United States (SCOTUS) seat to President Barrack Hussien Obama if she is elected President in 2016.

This ideas had been floated before and there were versions where Hillary becomes the forever judge instead of Obama but the threat to the free world remains the same. In a time of political revolution against establishment politics, once has to wonder what kind of confidence Clinton suddenly has that she will win in Iowa. Her numbers were better than Bernie's but she has been feeling the Bern in a bad way becasue she is seen as Washington Royalty.

There has to be a little more in play Hillary to make such an inside-the-betlway play of making the current troubled President a lifer on the SCOTUS. Her confidence is bolstered by something, but what could it be?

The President's record is troubled too, that's why Bernie Sander's campaign is possible. Bernie just rehashes the same old commie-lite talking points from 2008 and it sound great to young people becasue President Obama didn't deliver too much on his unicorn and rainbows platform. That's how socialism works, each successive socialist is the one who will “do it better” than the last guy.

For President Obama, the spectacle of watching Hillary sweat is something to relish.

Please see the next page for Obama as SCOTUS details.