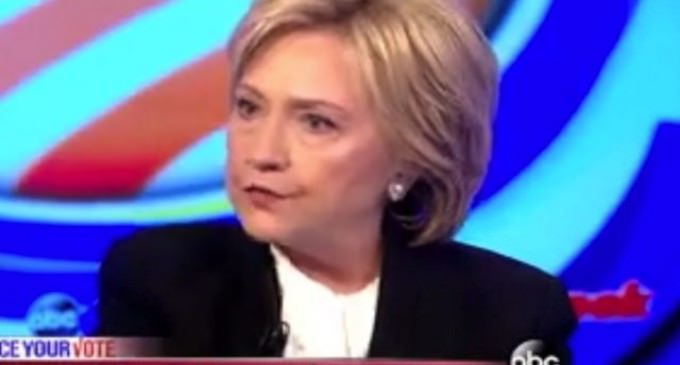 Hillary Clinton is a shameless liar, and everyone knows it. She has been caught out prevaricating so many times that when she speaks it is almost assumed that what she says will be shaded or a fabrication.

When she led the charge in trashing women's characters and recollections as she protected her sexual predator husband from potential impeachment during his presidency, and talked about the vast, right wing-conspiracy that was making up completely false charges, it took a a pound of salt to swallow her depiction of events as she remembered them.

In her recent recounting of how and why government emails went missing from her private server, documents that she insisted were recipes and yoga workout directions, it was beyond belief that anyone would give credence to what she was saying.

And yes, when the documents were subsequently found, over 1,000 of which were classified, her story kept changing to account for the discrepancies, but she delivered each new tale with an attitude that seemed to question why in the world anyone would doubt her honesty and integrity. Her explanations were laughable, but the press played along, and Democrats seem to have no problem with Hillary being a complete and unmitigated liar.

Clinton has lied so often that it is expected and seems to be second nature to her. However, her performance resulting from the Benghazi hearings recently has been so outrageous and cruel that she has truly outdone herself.

Back in 2012, the U.S. consular compound in Benghazi, Libya came under attack by Muslim terrorists, an attack that lasted for an evening and the next day, and four Americans, including the U.S. ambassador were killed. There were serious questions about how this could have happened, and why no support was provided, and strangely, neither President Obama nor Clinton were very visible during the rebel action. When they did emerge, it was with a story about a little seen anti-Muslim video on YouTube that, it was claimed, had whipped a mob into a murderous frenzy.

It seemed strange that an ad hoc group of rioters would have automatic weapons and rocket propelled grenade launchers, but the lap-dog media reported the explanation just as Clinton and the Obama administration laid it out.