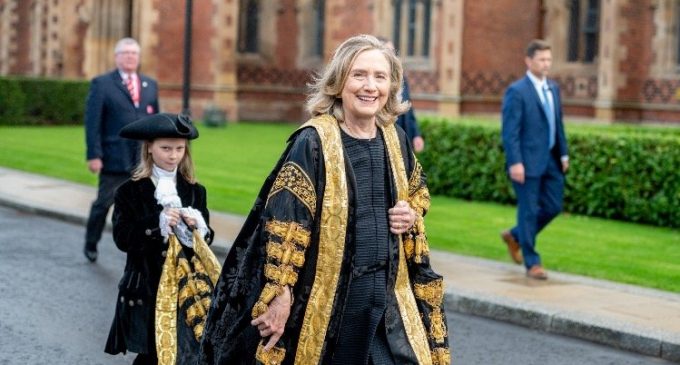 TRUTH AND ACTION POLL: Should President Trump have had Hillary Clinton arrested when he was president? Click to respond

American politicians have not been welcome overseas as of late, or at least we can say that about Democrats. Earlier this week Nancy Pelosi was brutally heckled when she arrived in the United Kingdom for a talk at Cambridge University.

British protesters screamed remarks such as, ” Trump won!… You’re not welcome here… Go back to Epstein Island!… We don’t want you!…Criminal… The whole world knows that Trump won the 2020 election!”

The same fate fell upon Hillary Clinton when she arrived at Queen’s University Belfast on Friday where she was installed as the first female chancellor.

Protesters shouted, “war criminal!” as Hillary, donning her new chancellor robe, walked up the steps into the building.

TRUTH AND ACTION POLL: Should President Trump have had Hillary Clinton arrested when he was president? Click to respond

Trying on my new chancellor's robes for size. They fit!

So honored to be officially installed today as the first female chancellor of @qubelfast—doubtless the first of many. #LoveQUB pic.twitter.com/7GhBzdSqE0

They won’t be able to walk down the street…

Hillary being booed and called a criminal over and over again outside Queens University. pic.twitter.com/kAF6PHJOY1