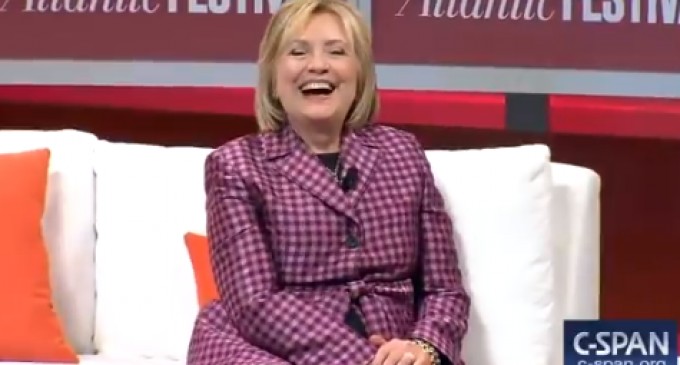 On Tuesday at an Atlantic Festival event, Hillary Clinton burst out into a shrill cackle when asked about Supreme Court nominee Brett Kavanaugh's claim that the multiple sexual misconduct allegations against him are “revenge on behalf of the Clintons.”

“It deserves a lot of laughter,” Clinton said while chuckling. “I thought it was just part of the whole of his very defensive and unconvincing presentation.”

“I told someone later — they give us a lot of credit,” she added. “Thirty-six years ago, we started this against him?”

Kavanaugh was referring to the Supreme Court nominee's time where he played a key role on Starr’s team investigating sexual misconduct by then-President Bill Clinton. In his opening remarks to the Senate Judiciary Committee, Kavanaugh blasted the congressional inquiries as politically motivated.

“This whole two-week effort has been a calculated and orchestrated political hit, fueled with apparent pent-up anger about President Trump and the 2016 election, fear that has been unfairly stoked about my judicial record, revenge on behalf of the Clintons and millions of dollars in money from outside left-wing opposition groups,” he said.

See the swamp goddess deny Kavanaugh claims on the next page: