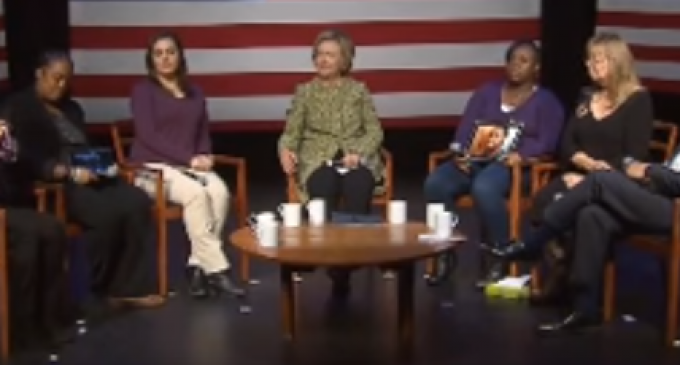 When you are running in a Democratic primary against a self-avowed socialist it can be difficult to outflank your opponent to his left, but Hillary Clinton sure is trying.

Vermont Senator Bernie Sanders, who describes himself as a Democratic-socialist — whatever that means — has long set the bar in American politics for far-left policies.  Before the 2016 election, Sanders wasn't even a member of the Democratic Party but officially joined so that he could run in the Democratic primary.

Since entering the race, Sanders has swung the party platform even further to the left than Obama did in 2008 and 2012.  Sanders pushed candidates such as moderate — sometimes sensible — Vietnam War veteran, Jim Webb out of the party.  Sanders' position that basically everything should be “free” has excited millennials, many of whom strongly subscribe to an entitlement culture where wealth is something not to be earned, but something they are owed.

The one issue on which Senator Sanders is not to Clinton's left is his stance on the Second Amendment.  Sanders comes from a rural hunting state, generally supports gun rights, and opposes holding gun manufacturers liable for shooting deaths.

Hillary Clinton has pounced on the opportunity to “out-liberal” Sanders on an issue and has constantly and shrilly attacked Sanders on this issue.  And on Monday, Clinton appears to have has stepped up her extremist position on the issue as she agreed with a fellow panelist who claimed “Americans are the terrorists” and gun manufacturers are responsible for these American terrorists.  To read more and watch a video of Clinton agreeing with this statement continue on the next page: