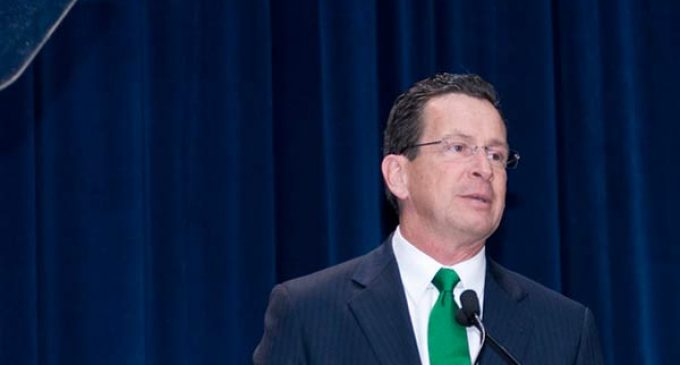 Democrat governor of Connecticut, Dannel Malloy spoke on Wednesday at a town hall meeting in Milford and his glib remarks were interrupted by a heckler who advised him to read the Constitution. Fortunately the brief interchange was caught on camera (video below).

The comment came when Gov. Malloy, a Democrat, was answering a question from a small business owner who said he is at a disadvantage to businesses in adjacent states that have a lower wage structure.

“I think that’s not only a state issue, but we’ve got this thing called the Constitution, so it makes it a little difficult to do some of the things you suggest,” Malloy replied with a smile.

Suddenly a woman’s voice is heard shouting: “Why don’t you read it sometime!”

A few snickers followed, but the governor just blew past the remark.

Connecticut is the state that created tens of thousands of felons with its new draconian gun registration laws that took effect at the start of the year and Malloy has faced widespread criticism for his support of the unconstitutional bill.

The bill has technically turned gun owners who legally purchased semiautomatic rifles into felons overnight after many have refused to register their guns and high-capacity magazines.

The state has yet to announce how or if they plan on enforcing the new law with criminal charges and arrests. According to some estimates, as many as 100,000 gun owners are in violation of the new gun control law.