A predominantly black group of heavily armed militants marched through Stone Mountain Park near Atlanta on Saturday, calling for the removal of the Confederate monument depicting likenesses of Jefferson Davis, who was president of the 11-state Confederacy, and two of his legendary generals, Robert E. Lee and Thomas “Stonewall” Jackson. 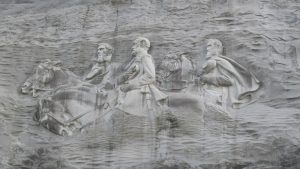 The group, identified as the “Not F**king Around Coalition” (NFAC), also issued challenges to ‘white militia' and ‘scared-ass rednecks' frequently during their march.

NFAC Founder Grand Master Jay told Newsweek via phone Sunday that the militia members at Stone Mountain on Saturday were “100 percent black” and they are not affiliated with Black Lives Matter. “We are a black militia. We aren't protesters, we aren't demonstrators. We don't come to sing, we don't come to chant. That's not what we do,” he said.

“It was all black … there were no brown people, no white people… everyone was black. I am not a protester, I am the commanding general of my militia, we were swearing in new members,” he added, highlighting there was a second militia “show of force” Saturday near Phoenix.

“I don't see no white militia, the boogie [boogaloo] boys, the three percenters and all the rest of these scared-ass rednecks. We here, where the f**k you at? We're in your house,” one protester said into a PA system during the Stone Mountain Park march.

John Bankhead, a spokesman for the Stone Mountain Memorial Association, said the protests were orderly and acknowledged the Confederate monument is frequently used as a meeting place for far right-wing militia.

“It's a public park, a state park. We have these protests on both sides of the issue from time to time. We respect people's First Amendment right,” Bankhead told WXIA-TV. “We understand the sensitivities of the issue here at the park … so we respect that and allow them to come in as long as it's peaceful, which it has been.”

In the video below, one leader can be heard saying, “If you ain't ready to give yo' f*ckin' life, then get the f*ck outta here right now.”

In the footage below members refer to themselves as “black militia,” and accosting white people in their cars, warning one driver: “We are your worst nightmare.”

Do the Black Panthers run Stone Mountain now or something? I have no problem with armed folks walking around with firearms as is their 2nd Amendment right, but they shouldn't be interrogating motorists. https://t.co/HOym2dy5Fh

Yesterday—NFAC marched into Stone Mountain Park, a popular gathering place for the KKK in Georgia, to call out white supremacist groups. pic.twitter.com/IeIJ6EpAFC

Protesters in Stone Mountain Park, Georgia, send a gentle reminder that open carry and stand your ground is not just for racists…pic.twitter.com/tXkTnfjdlQ