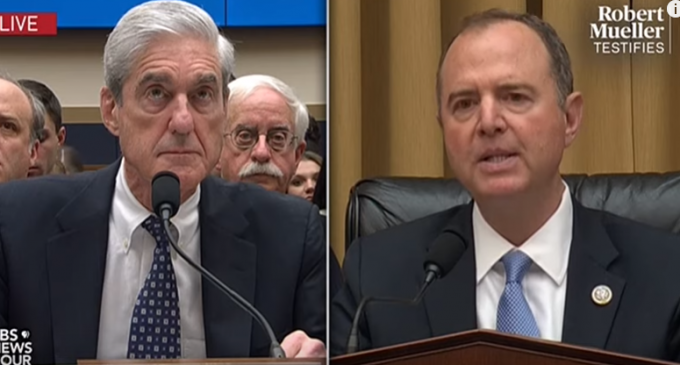 The congressional hearings today with former Special Counsel Robert Mueller was a grand disaster for Democrats. Now only did they fail to get the sound byte from Mueller to wave around to their base making their case for obstruction by the President, the only real product to come out of the hearings was the obvious fact that Mueller didn't even have command of his own report – indicating that he was hardly the one to write it. Mueller's failure to command his own report and the failure to answer questions put forth in the hearings leads one to question if his staff was really calling the shots behind the entire investigation.

During the first hearing in front of the House Judiciary Committee headed by Democrat Jerry Nadler, Democrats tried six ways from Sunday to get Mueller to throw them some sort of bone regarding obstruction, but Mueller didn't bite. In the second hearing in front of House Intelligence Committee headed by Democrat Adam Schiff, the Dems shifted gears away from pressing the case for obstruction and instead embarked on platitudes of morality and how the President isn't holding up the ethical standards that his position deserves.

Apparently, Dems saw that they wouldn't get the goods with obstruction, so they went for sound bytes to quote themselves over for the next few months leading up to the 2020 election.

The hearings failed so badly for the Dems that CNN put out a piece practically begging the Dems to stop with this nonsense.

What a nightmare Robert Mueller’s testimony has been for Congressional Democrats and their dreams of impeachment momentum. In his much-anticipated bombshell performance, Mueller bombed. Aside from difficult to watch testimony, there has been no new information and no elaboration on the 448-page report.

The former Special Counsel’s testimony is another in a long series of Rorschach tests that essentially has yielded nothing. Democrats still look at the Mueller Report and see corruption; Republicans still look at it and see exoneration.

As for the testimony, the take-away for Democrats was simple: Judiciary Committee Chairman Jerry Nadler asked if Mueller intended to totally exonerate the president, to which Mueller replied, “no.”

The Republican take-away was equally direct: Rep. Louis Gohmert, R-Texas, accused Mueller of “perpetuating injustice” as the former argued that Trump had a right to feel he was under attack by a biased investigation.

President Trump, in fact, did not interfere with this investigation. Trump and the White House cooperated with Special Counsel Mueller and were committed to transparency.

It’s important to remember that the Mueller report, in its own words, “did not establish that the [Trump] campaign coordinated or conspired with the Russian government in its election-interference activities.” Mueller and his team found no “evidence that any U.S. person who coordinated or communicated with the IRA [the group that carried out Russia’s election interference efforts on social media] knew that he or she was speaking with Russian nationals engaged in criminal conspiracy.”

Despite Democrats’ best attempts to pull Mueller outside the parameters of his report, he did not take the bait. With that, it’s time for Democratic leaders to stop obsessing over this closed case and to put the American people first.