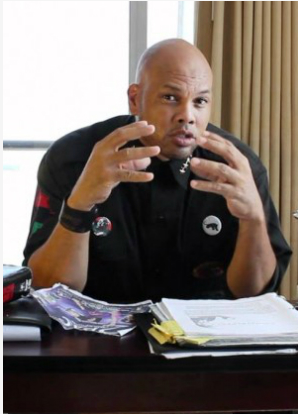 In October 2013, Malik Zulu Shabazz stepped down as the New Black Panther Party’s national chairman. His replacement was Hashim Nzinga, who had previously served as the organization’s chief of staff.

Although the group has not been found responsible for any violent attacks, according to the Southern Poverty Law Center, past New Black Panther party leaders have advocated the killing of Jews and white people.

According to media accounts, at a 2002 protest in Washington, D.C., another leader, Malik Zulu Shabazz, yelled, “Kill every … Zionist in Israel!”

Asked about such comments, current party Chairman Nzinga told the Los Angeles Times, “I still say that all the time now. You’ve gotta kill them before they kill you.”

The transition from Shabazz to Nzinga proved seamless as the intense tribal hate is shared by both men.