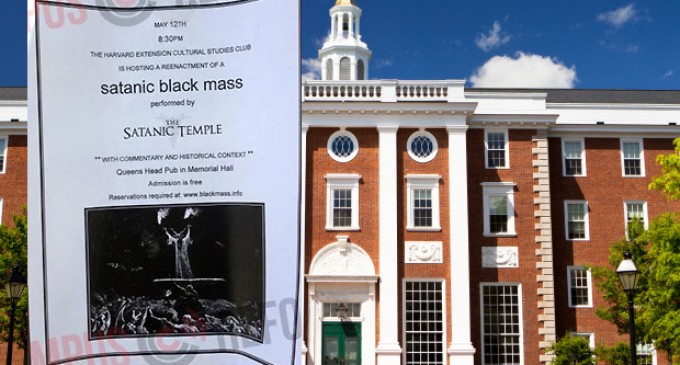 A reenactment  of a Satanic Black Mass is scheduled for May 12 in the Queen’s Head Pub in Memorial Hall at Harvard University.

The Mass will  be performed by The Satanic Temple and is being hosted by the Harvard Extension Cultural Studies Club.

“While Black Masses are supposed to utilize a consecrated host, ours is merely representative of a consecrated host. It is not consecrated. We neither believe in nor invoke the supernatural,” states Lucien Greaves, spokesman for The Satanic Temple.

Harvard Univ. stated that they will support the rights of free speech by the students.

The event starts at 8:30, just in case you live nearby and would like to show up and exercise your free speech rights too.

(CNSNews.com) – A Satanic Black Mass reenactment is scheduled to take place at the Queen’s Head Pub in Memorial Hall at Harvard University on May 12, with the Mass performed by The Satanic Temple, which is being hosted for the event by the Harvard Extension Cultural Studies Club.

A non-consecrated communion host will be used in the reenactment, according to Lucien Greaves, spokesman for The Satanic Temple.

“To us, the Black Mass is an amalgamation that developed through time based on witch-hunting fears and later adopted by some as a declaration of personal Independence against what they felt to be the stifling authority of the church,” said Greaves.

He further said that during the Black Mass reenactment, representatives of The Satanic Temple will provide narration on the academic and historical aspects of a Satanic Mass.

A flyer with an image of a goat-headed, Satanic figure standing on an altar surrounded by damned souls was posted at the Harvard campus announcing the event.  It states that the Harvard Extension Cultural Studies Club is hosting “a reenactment of a satanic black mass performed by The Satanic Temple ** with commentary and historical context **.

The flyer further says the Mass will occur on May 12 at 8:30PM in the Queen’s Head Pub in Memorial Hall, and that admission is free.

The “official response” states, “An independent student organization, the Harvard Extension Cultural Studies Club, plans to host a controversial student event involving a historical reenactment of a black mass ceremony that has a narrator providing historical context and background.

Lucien Greaves, spokesman for The Satanic Temple, which is scheduled to conduct the Black Mass reenactment at Harvard University on May 12, 2014. (Photo: Shane Bugbee/Vice.com)

“Students at Harvard Extension School, like students at colleges across the nation, organize and operate a number of independent student organizations, representing a wide range of student interests.

“Harvard Extension School does not endorse the views or activities of any independent student organization. But we do support the rights of our students and faculty to speak and assemble freely.

“In this case, we understand that this independent student organization, the Cultural Studies Club, is hosting a series of events—including a Shinto tea ceremony, a Shaker exhibition, and a Buddhist presentation on meditation—as part of a student-led effort to explore different cultures.”

The Queen’s Head Pub is in Memorial Hall, which is at “the heart of Harvard’s campus” and was “dedicated in 1878 as a monument to Harvard alumni who died during the Civil War,” it states on its Facebook page. The Hall was completed in 1876, and the Queen’s Head Pub was built in the Hall’s basement in 2007. The pub is 12,000 square feet and can accommodate up to 450 guests.

Harvard University was launched in 1639 through a financial gift from the Protestant clergyman John Harvard.  In its early decades, Harvard trained many Protestant ministers who went on to serve the various Christian churches of New England.

The Satanic Temple, which is scheduled to perform the reenactment Black Mass, is the same group that is trying to have a statue of Satan (depicted as “Baphomet”) installed on the grounds of the Oklahoma State Capitol.

Concerning the “child-friendly” Satan statue, Greaves told CNSNews.com, “Our monument will stand in honor of those unjustly accused, the slandered minority, the maligned out-groups, so that we might pay respect to their memory and celebrate our progress as a pluralistic nation founded on secular law.”