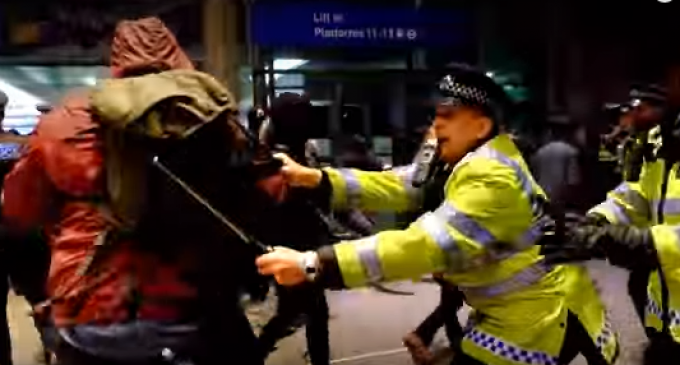 At least 200 hardcore militant far leftist rioters descended on St. Pancreas Square in the UK, this past Saturday night.  Calais Migrant Solidarity, invaded a peaceful protest out to bring attention to three muslim men who are imprisoned for crossing into the UK through the “Euro tunnel”.  The “Euro tunnel” connects with Europe and is a hot spot for illegal aliens to pass into the UK.

The protest was staged at the terminal that connects the UK to Europe, as police were on the scene with a barricade.  UK police do not carry firearms. The rioters began pressing in on the crowd of peaceful protesters, screaming “no nations, no borders”, then began to throw missiles of tear gas and with the crush the blue line of the police broke.  Later the rioters began making their way toward the Harry Potter terminal “9 3/4” were tourist became caught up in the riot.

see the outcome of riot next page