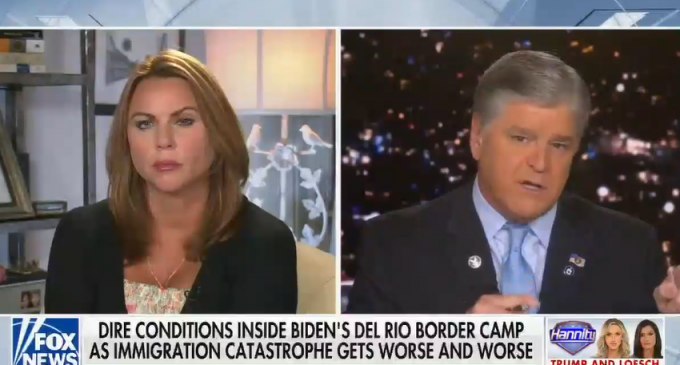 Why would Biden release thousands of migrants across the country after imposing unprecedented national vaccine mandates due to the ‘grave threat' the virus presents? Migrants, after all, could be ‘asymptomatic' and carry some new ‘variant'.

Sean Hannity this month spoke to investigative journalist and war correspondent Lara Logan who cited an unnamed “bioweapons specialists and intel agents” who told her allowing migrants into the country is a “typical” way to launch a “virus attack” on your own country.

SEAN HANNITY (HOST): Tonight, there is something deeply concerning, keep in mind. According to bioweapon specialists, intel agents, our own Lara Logan reporting that a migrant surge is a potential way for America's enemies to actually launch a virus attack– liken to COVID, sounds pretty scary. Lara Logan joins us with more.

Lara, well, first of all, the administration's lying because they are letting these — these illegal immigrants — they're deporting them and transporting them all across the country while they tell us otherwise. So, I don't like being lied to.

Let's go into what the intel people you are talking to, your sources, are telling you about a possible attack and people that would infiltrate this migrant community.

LARA LOGAN (GUEST): Yeah Sean, well, what they call it in biological warfare is a virus bomb, right? Because you know that you have mass numbers of people who are carrying this virus. And now you're distributing them all over the country.  And there are a number of, you know, law enforcement and intelligence and special operations professionals who've been working on this for a while with computers and mapping out the spikes in COVID across the country and mapping out what they can of the movement of illegal immigrants.

Turn the page for the original interview Logan gave on the subject as well as her interview with Hannity.