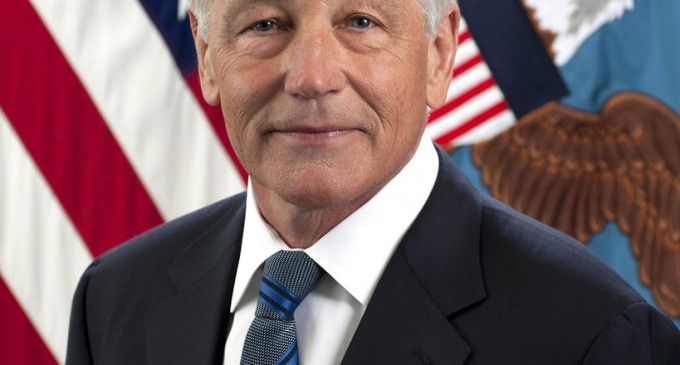 Defense Secretary Chuck Hagel stated last Sunday that he would be ‘open’ to reviewing the ban of transgender people in the military.

Hagel stated that the transgender issue was “a bit more complicated because it has a medical component to it.”

WASHINGTON — Defense Secretary Chuck Hagel said in an interview broadcast on Sunday that the military should “continually” review its prohibition on transgender people in the armed forces, calling into question whether the Pentagon’s ban may eventually be lifted, as was the ban on gay men and lesbians in the military.

While any such a reversal appears to be far in the future — the Pentagon’s stock talking points on the issue have been that it is under continuous review — Mr. Hagel, on ABC’s “This Week,” pronounced himself “open” to a review of the policy and added, “Every qualified American who wants to serve our country should have an opportunity if they fit the qualifications and can do it.”

But he allowed that the transgender issue was “a bit more complicated because it has a medical component to it.”

In the American military, transgender service members can be summarily dismissed, as Defense Department guidelines describe transgender people as sexual deviants and their condition as “paraphilia,” with its connotations of the atypical and extreme.

A panel affiliated with San Francisco State University estimated in March that more than 15,000 transgender individuals were serving in the military and the National Guard and the Reserve. Officials who worked on that study say transgender people are overrepresented in the military, compared with the rest of America, because many male-to-female transgender individuals enlist to try to submerge their feminine sides, while many female-to-male transgender people enlist because they want to be in a hypermasculine environment.

Last month, a soldier who was convicted as Pfc. Bradley Manning for leaking classified documents to WikiLeaks won an initial victory toward living as a woman when a Kansas judge granted a petition for her to change her name to Chelsea Elizabeth Manning. The decision cleared the way for changes to Private Manning’s military records, but did not compel the military to treat her as a woman, including not moving her to a prison with a women’s unit or allowing her the desired counseling and hormone treatment.

It remains unclear whether the military will seriously review its ban on transgender people, and President Obama has not addressed the issue specifically. In 2011, speaking to a gay rights group, Mr. Obama said that “every single American — gay, straight, lesbian, bisexual, transgender — every single American deserves to be treated equally in the eyes of the law.”