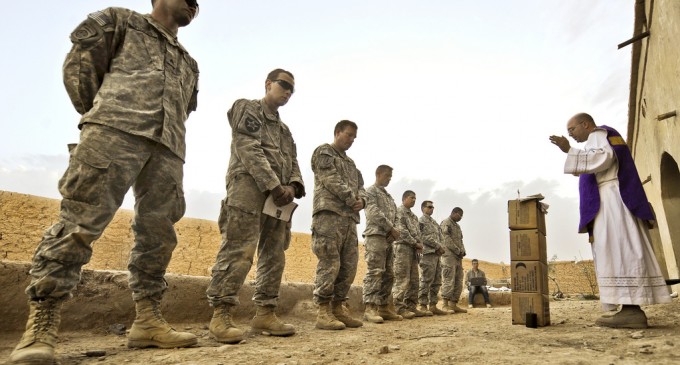 It's great we have moral compasses such as Chuck Hagel and Eric Holder.

So the Christian religion doesn't offer any kind of moral benefit and doesn't help your well-being. Gee, who would have known!

The Obama administration is continuing to prohibit approximately 50 Catholic priests from saying Mass and administering other sacraments at U.S. military facilities around the world, according to the Roman Catholic Archdiocese for the Military Services.

Father Ray Leonard, who is one of these priests, and who serves as the Catholic chaplain at Navel Submarine Base Kings Bay in Georgia, filed suit Monday against the Department of Defense, Defense Secretary Chuck Hagel, the Department of the Navy and Navy Secretary Ray Mabus.

His suit—joined by Navy veteran Fred Naylor, who is a member of the Catholic congregation at Kings Bay–alleges that the administration is violating his and his congregation’s First Amendment rights to the free exercise of religion, the freedom of speech and the freedom of assembly.

DOD has been prohibiting Father Leonard and the other Catholic priests from administering the sacraments and providing other services to their congregations even though two weeks ago Congress passed, and President Barack Obama signed, a law that instructed DOD to maintain on the job and keep paying contract employees who were supporting the troops.

DOD took this action because Hagel determined–after consulting with Attorney General Eric Holder's Justice Department–that civilian Catholic priests, working under contract as chaplains, did not, among other things, “contribute to the morale” and “well-being” of service personnel.