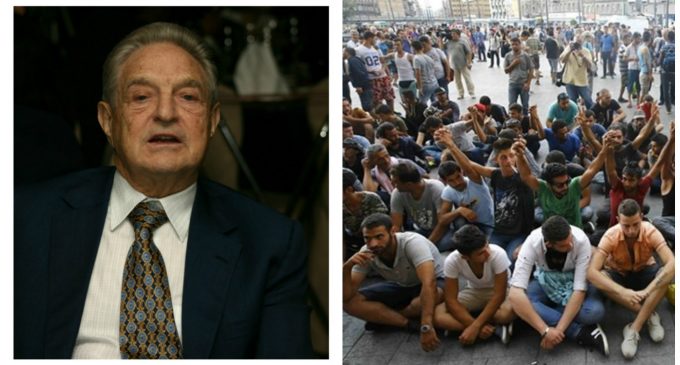 Evil is afoot when George Soros, the founder of The Open Society Foundation. is involved.  In a hacked memo, Breitbart Jerusalem learned that the Foundation lobbied the Obama administration to substantially increase the total number of refugees brought into the United States annually by 100,000.

Soros also pressed for the enactment of “two major policy objectives” tied to the “intake of Syrian refugees”, and one which financed “overseas refugee efforts” which has been already enacted by the administration.

Arch socialist globalist and race riot revolution mastermind George Soros emerged to spout an ultimatum to all Europe. Every country must “accept responsibility” for the mass influx of Muslims now flooding the continent.

“The EU needs a comprehensive plan to respond to the crisis, one that reasserts effective governance over the flows of asylum-seekers so that they take place in a safe, orderly way, and at a pace that reflects Europe’s capacity to absorb them. To be comprehensive, the plan has to extend beyond the borders of Europe,” Soros writes.

The plan must be globalist in nature, Soros argues, and led by the United Nations. “This would distribute the burden of the Syrian crisis over a larger number of states, while also establishing global standards for dealing with the problems of forced migration more generally.”

It is apparent that the Open Society Foundations, which has a part of its value statement, “taking on controversial issues and supporting bold, innovative solutions that address root causes and advance systemic change” has used Obama to make systematic changes in America with the influx of 100,000 refugees.

The rest of the story will make your blood boil.  Read it on the following page.