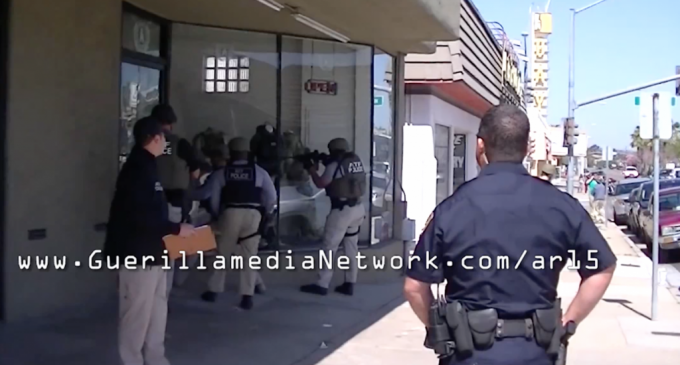 Mr. Karras now states in the interview below that he was told during the second raid that they wouldn’t have raided him the second time if he had not gone to the media!

He was told that he embarrassed BATFE and they needed to make an example out of him.

This is how far down the road to tyranny we are, that if a citizen legally operates a business, legally defends himself against the feds and uses their 1st Amendment rights, they will be attacked.

Why was Ares Armor raided in the first place? After the store had sold a plastic version of a particular gun part that makes it easy for people to make their own AR-15 – they were raided. People making an AR-15 with these parts would own a gun which would have no serial or registration number.

5000 people have bought these parts – and BATFE demanded that list. The feds don’t want unregistered guns floating around out there. That is the real reason for the raid as it is completely legal to sell these parts.

Dimitri Karras is fighting this tyranny like a true patriot. He states that these events have emboldened him, but he needs all of our support.

THIS IS THE FIGHT FOLKS! Right here, right now!

Fight for your right to live as a free American right now by supporting Mr. Karras. Doing at least one of the following:

Karras correctly points out that too many people in America just want to sit on their couch, enjoy their creature comforts and let tyranny come, not actually paying the price for freedom. Please, do let that be you. Do something here as a citizen of the US who wants to live in a free state!

On March 13, 2014, the owner & CEO of Ares Armor Dimitri Karras came on The Pete Santilli Show to celebrate his success in stopping the Bureau of Alcohol, Tobacco, Firearms & Explosives (BATFE) from threatening to raid his business to obtain his customer list.  As Mr. Karras described in his interview, the BATFE had contacted him regarding their concern about certain “polymer” lower receivers which are used as a guide in properly manufacturing the part.  The polymer receivers are 100% legal, but despite their legality the BATFE insisted that Ares Armor release the list of their customers who have received plastic receivers.

Although it’s important not to make certain assumptions, it’s pretty safe to say that the BATFE was not going to send Christmas cards to the customers listed on Ares Armor’s list.  Needless to say, Dimtri Karras refused to surrender his customer list voluntarily.  He has maintained the constitutional and privacy protection of his customers, and on March 13, 2014, he was granted his day in court.  The Temporary Restraining Order (TRO) is currently in full effect, and the preliminary injunction hearing is scheduled for March 20th.

Shortly after the TRO was ordered, the BATFE sought and received a search warrant in opposition to the TRO’s mandate.  The U.S. Government essentially moved towards ignoring the TRO, and trumping the order for the purposes of seizing property and information which was voluntarily offered to them.

On the morning of Saturday March 15, 2014, the BATFE conducted a heavily armed raid on all three locations of Ares Armor.  Customers were treated disrespectfully, and one retail location had the front entrance destroyed.  Video was taken of the BATFE’s forced entry [Click Here]

Today, Sunday March 16, 2014 Pete Santilli interviewed Dimitri Karras to get his side of the story, and you definitely want to hear this exclusive interview from start to finish.  Dimitri reveals the details of the entire ordeal dating back to the original contact with the BATFE leading all the way to the present day legal battle which he vows to fight on behalf of all of his customers, employees and especially his fellow Americans.

Please take note, despite the BATFE insisting that they be allowed to break down the door of Ares Armor (obviously these goons believe they are “fighting for our freedom”), the BATFE destroyed property at the expense of Ares Armor, shoved their tyranny in the face of Ares Armor customers, and violated almost every one of the first group of Constitutional Amendments at the expense of every American —- Ares Armor is allowed to continue operating their business.  We repeat, THEY NEVER SHUT DOWN ARES ARMOR.  This was all about force, intimidation, and obtaining the customer list in violation of everything but their guide to tyranny, the “Patriot Act”.  The BATFE seized property, inventory and Ares Armor’s  customer list, and the rest of us are supposed to accept this.

After listening to the interview and learning more, Guerilla Media Network encourages you to do whatever you can to support Ares Armor.  We are fully committing our resource to communicate his story and advertise Ares Armor products and services.  The best way to respond to this horrific display of government tyranny is to do exactly what the BATFE admitted they were upset about:  Let’s embarrass the hell out of  the Bureau of Alcohol, Tobacco, Firearms & Explosives (BATFE) until they realize who runs this country, and what “shall not be infringed” means in the 2nd amendment.  If you can make a purchase, buy as many weapons from Ares Armor as you can afford.  Unfortunately it is the only defensive means we have to stop government tyranny which is alive and well in the United States of America.