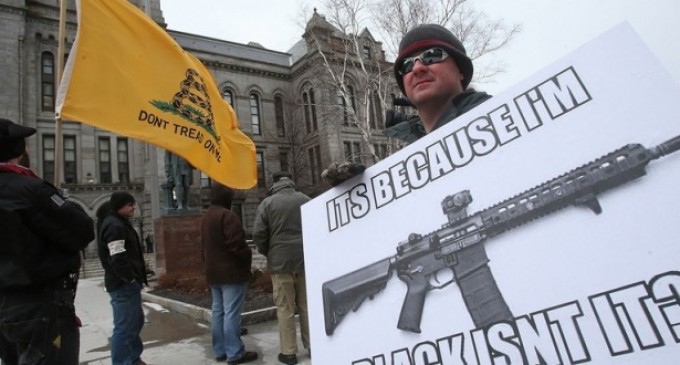 By April 15th, any New Yorker that owns an “assault weapon” must register it per the New York SAFE act that passed last year.

But only 1% have done so thus far.

Looks like we're going to see another massive act of civil disobedience like we saw in Connecticut.

Hello patriots in New York! Much love from Alabama!

By April 15th, any New Yorker that owns an “assault weapon” is to have registered their gun, per the requirements of the New York SAFE act passed last year. But it’s looking more and more like a tiny percentage of New Yorkers are actually doing it.

While the state of New York has not released actual firearms registration numbers, the rumors of registrations in the 3,000-5,000 range mean that 99% of those affected gun owners are refusing to comply with the law.

Furthermore, gun manufacturers are already responding to the law by designing guns that carefully circumvent its specific requirements.

The problem with any “assault gun” law is that they necessarily focus on the appearance of the gun, such as handgrip style, color, or other feature. The ammunition that such a gun uses is identical to that used by guns that are deemed legal. In other words, the style of the gun determines its acceptability instead of the substance. They all fire the same bullets.

In New York state, further adding to the problem they are having motivating gun owners to sign up, many state law enforcement officers have publicly stated their opposition to the law and their refusal to enforce it.

It turns out  support for the 2nd Amendment is alive and well in New York!