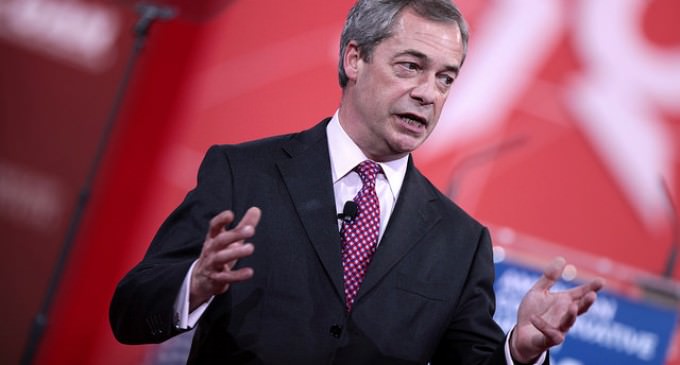 Surprise, surprise, the Guardian newspaper in its grimmest Dan Rather voice has announced the intentions of the FBI to begin investigating Nigel Farage as a “person of interest,” so say SOURCES.  These days, “sources” means we're guessing at this stuff and hope that someone else comes forward to corroborate our guess (or hope).  The Leftist British rag that is known as the “Tabloid of Record” in certain Right wing circles, or so my SOURCES say (wink, wink), has decided to throw even more innuendo out there in its quest for the total annihilation of the Trump presidency and anyone remotely connected with the British exit from the European Union.

Lest we forget,  the Guardian's polls were all skewed to the Left when the Brexit was in full swing, attempting to influence the vote.  In classic Leftist style, they ran article after article, day after day, with constant updates, that explained the apocalypse to ensue with all the loss of industry, the terrible unemployment, the crash of the markets, the mass exodus of business from the UK, and the French making fun of them, should the British people back this insane idea of leaving the godsend EU, a collection of misfit nations who got together one day over a Chardonnay and Cambiare and decided to make the world a better place by raising taxes, throwing away national identity, opening borders to terrorists, punishing the more industrious nations, and creating a money system that was sleek, fun and proves that even 27 nations combined can only JUST equal the US Dollar.

Now that we've established that the Guardian is a completely unbiased source of thoughtful opinion and insightful news, let's move on to just what is at the heart of these newshounds and their sudden obsession with Nigel Farage.  One of the more revealing moments came when the Guardian gushed over the revelation that former CIA Chief John Brennan, the man who's sprung more leaks than Edward Scissorhands' waterbed, called “adamant denials of collusion by Assange and Russia…disingenuous.”  This coming from the kettle, of course.

The Guardian is using many obvious leaps in logic to attach Farage to Trump, all of which are clearly known to the FBI, leaving the “Tabloid of Record” to surmise that they have happened upon new and exciting, damning evidence of even more collusion!  Queue up the “Imperial Death March” and read more “unbiased” inferences on the next page: