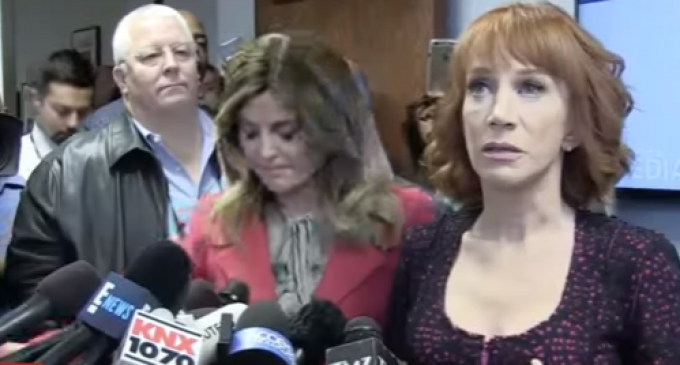 Kathy Griffin is on the verge of smirking tears as she attempts to fight back against bullying and “death threats” she's received since holding up a bloodied head resembling the President of the U.S.

According to her lawyer, Lisa Bloom, President Trump and his entire family is attacking her and forcing others to engage in bullying. Griffin thinks she can prove this because the Secret Service contacted her following her posting the depraved images and video. She has been forced to retain a criminal lawyer on account of Trump and his family “using their power to target her.”

“As a result of the first family bullying her, she has been vilified, getting death threats, fired from multiple jobs and had multiple events canceled,” Bloom said

Kathy and her lawyer do everything but accept responsibility that she actually initiated this entire circus with her highly inappropriate and potentially illegal posting. Instead, she blames sexism, ‘old white men', the entire Trump family and, well, move on to the next page to continue: