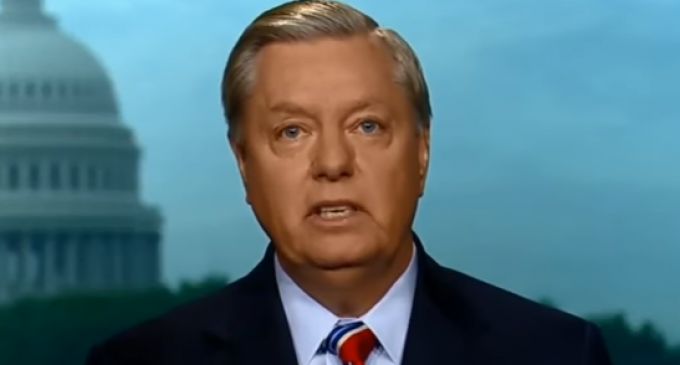 Has there been a moment when Senator Lindsay Graham (R-SC) has had the express and truthful confidence of the Conservative Christian voter?  Think about that for a moment.  The man has been on a quest for decades to undermine everything that Conservatives have stood for, complete with calls of incompetence on the part of Ted Cruz and anger at the rise of the Tea Party.

Graham has been a staunch crusader against everything that is the polar opposite of what the Establishmentariat needs or wants.  The South Carolina senator has been in lockstep with Senator John McCain for as long as the two of them have been at the forefront of politics, working behind the scenes to raise the debt ceiling, signing bills that no one has read, or denigrating the efforts of true Conservative crusaders to drain the swamp of politics as usual.

When the specter of Graham rose up against Donald Trump the first time last year during the campaign, it was fully expected that he was in talks at the secret Establishment clubhouse with Reid, Schumer, McCain, McConnell, Boxer and the rest of the No-Term-Limits Gang, plotting response and counter-response to every move that Trump's campaign made to effect headway through the sludge of the political river issuing from Washington.

When his initial little digs became all-out hysterical calls for investigations every other day, we still paid no attention to this man who had his ear to the ground of Leftism in order to tap into the vein of Kumbaya politics.  We already knew where he stood.  We were already too aware of his motives for following puppy-like in the big-boy footsteps of Bill Kristol as they chanted “Never Trump” in the candlelit inner chambers of the clubhouse, pounding the table with their souvenir-shop United Nations min-flags.

So, it comes as no surprise (for the thousandth time) that Graham has eagerly clambered over the mountain of Establishmentariat voices to grasp at the CNN microphones in order to pile on to the already crowded mass of bodies that shower the Trump administration with fake headlines.  Having pulled the short straw at the clubhouse, it is Graham's duty this week to attempt to destroy Trump through innuendo and alternate truths (just the type that drive up Rachel Maddow's ratings and those that keep Keith Olbermann's mother from evicting him from her GQ-funded basement).

Graham's latest BREAKING fake news headline:  Graham is calling on a “panel” to look into Trump's business dealings with Russia!