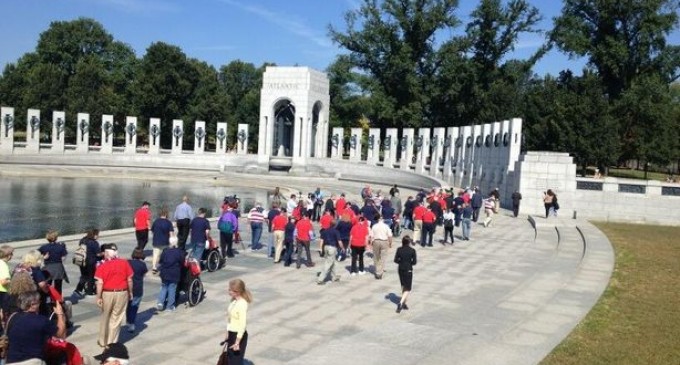 You might have heard that, due to the government shutdown, blockades were erected yesterday at the WWII Memorial yesterday and at other memorials across the country. But our steadfast veterans simply went around them, defying the closure.

Today, in yet another slap in the face of our vets, more barricades were placed. However, that couldn't stop our veterans, who showed, once again, that they are not to be underestimated.

With a classic distraction technique, our aging vets, many in wheelchairs and walking with canes, of course, outfoxed the guards and visited the memorial anyway.

Go guys! We're all behind you.

He said he walked over to the guards watching the site and began to talk to them, creating a distraction that the veterans used to push aside the barriers and enter the circular stone memorial.

Talking to reporters later, Mr. King said he was proud to have helped. “I rank this as one of the best days I’ve had a chance to be here in Washington — perhaps the best,” he said. The park service said it would rethink its policies.

In the meantime, photos of the veterans defying the service and its barricades went viral online, and drew strong support from both sides of the aisle on Capitol Hill.