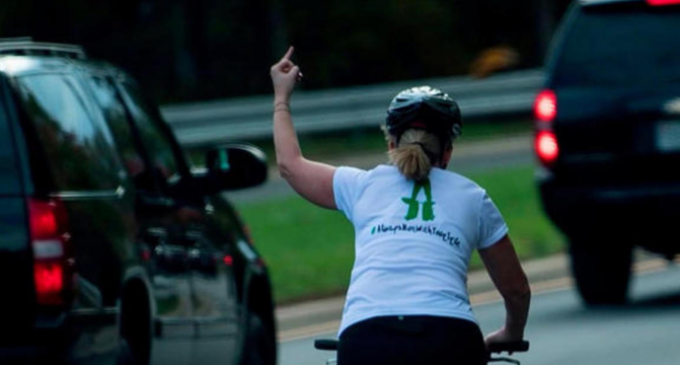 A woman working for a government contracted agency found herself in hot water when she decided to find an ill-advised way to get her frustration with the President out to the world.

Julie Briskman, the women in question, has this to say about her raging emotional state just moments before pulling off her stunt.

“He was passing by and my blood just started to boil,” Briskman said. “I’m thinking, DACA recipients are getting kicked out. He pulled ads for open enrollment in Obamacare. Only one-third of Puerto Rico has power. I’m thinking, he’s at the damn golf course again.”

Fueled by her anger over illegal aliens having to leave our country, Briskman gave into her rage and fully embraced anti-Trump derangement syndrome with all the zest of a slightly more in shape Lena Dunham.

What exactly did she do? Well you can see! Head on over to the next page to learn the rest of this story and how it's costing her bigly.