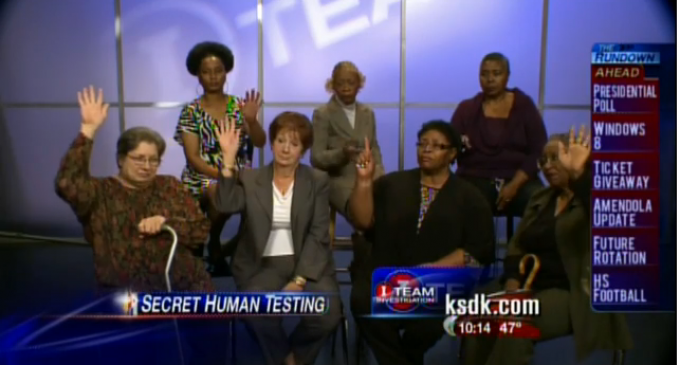 Recently St. Louis survivors, who have suffered from everything from skin lesions to degenerative bone cancer, have begun speaking out about the spraying that occurred in the 50s and 60s.

“They said we were living in the projects, but we were the project”, states on victim.

Our government conducted these atrocities on it's own citizens by admission of these documents. We see today how the government has been stripping away our Constitutional rights and blatantly committing crimes.

So exactly when did we lose our government as an entity that serves the public to one that serves it's own criminal and sociopathic ends?

St. Louis (KSDK) – A recent I-Team investigation showing how the Army experimented on unsuspecting St. Louisans in the 1950s and '60s has been getting worldwide attention.

The problem for the government is that survivors remember and for the first time are sharing their stories in hopes someone will listen and perhaps be held accountable.

In the early days of the Cold War, the Army arrived in St. Louis and began spraying zinc cadmium sulfide on children and families, who lived in and around the Pruitt Igoe housing projects located north of downtown St. Louis.

“They said we were living in the project, but we were the project,” said former Pruitt Igoe resident Doris Spates.

At the time, no one questioned why the army placed chemical sprayers on the backs of cars and the tops of buildings. Many, like Leareon Burnett Hamer, thought they were killing mosquitoes.

A group of people who were exposed to the zinc cadmium sulfide came to our studios to tell their stories. Most of them are now in their '60s.

“I remember the soldiers coming and taking chains and chaining the box, the black box to the light posts,” said Patricia Williams.

Dorothy Johnson and her doctors never knew what caused blisters to boil up and cover her body when she was 18-years-old. The life-long emotional scars never healed and she wonders if there is a connection to the secret testing.

Through tears, Johnson said, “They isolated me and I stayed there about a month to recuperate. I lost my fingernails, my toe nails, the lesions on my body. They fed me intravenously. I couldn't see well. They kept me in the dark.”

It doesn't sound possible, but Elaine Torez has vivid memories.

“We were playing and we ran in the house because we saw these guys in the alley in space suits and that's what we called them. Now I know they were hazard suits,” she said.

These women, who never met, share similar stories, and illnesses.

In the '90s the Army admitted to the Cold War spraying and even confessed to planting a cover story, that they were testing a smoke screen to protect cities in case of an aerial attack from the soviet union.
The Army insisted the spray was harmless.

That is not what St. Louis sociologist Lisa Martino-Taylor has uncovered after spending years researching and obtaining now declassified government documents.

“They (the Ggvernment) misled people and exposed them without their consent,” she said. “This was linked to the development and testing of weaponized radiation.”

Martino-Taylor says cadmium would have been toxic enough, but government documents show a link between the St. Louis testing and military-funded human radiation experiments.

The military now admits to some horrific Cold War human experiments around the country. A handful of hospital patients were secretly injected with plutonium. Babies and pregnant women unknowingly received radioactive iodine.

And, from 1946 through 1953 73 mentally disabled children in Massachusetts were fed oatmeal containing radioactive calcium.

Yet, much of what happened in St. Louis remains shrouded in secrecy.

“Not only was data missing, data has been deleted,” said Martino-Taylor.

“What was it that made the study so classified that they're still not talking today about it,” asked Martino-Taylor.

Decades later, those questions haunt survivors. Could the chemical spray have caused their degenerative bone disease or the cancer that plagues them and their families?

Mary Helen Brindell has had four different types of cancer.

“One of the types of cancer I had was papillary carcinoma, which the surgeon said to me when at first I was diagnosed, he said, did you have any radiation exposure? And I said, no, not that I'm know of,” she said.

These women haven't forgotten and they vow to keep talking about what happened now that someone's listening. None say they trust the government.

“I know this has gone on in other countries, but I thought that our country was a litter bit better than that,” said Elaine Torez.

Whether radioactive material was used remains open to question. What is not in dispute is that the Army selected the poor and powerless, and exposed them to potentially harmful chemicals without their knowledge or consent.

After our initial report aired last month, Missouri's U.S. Senators Claire McCaskill and Roy Blunt wrote to the Secretary of the Army demanding more information about the St. Louis testing.

The army has yet to respond. An Army official told the I-Team they would first respond to the senators before making any statement to the media.

To weigh in on this topic you can contact Senator McCaskill or Senator Blunt.