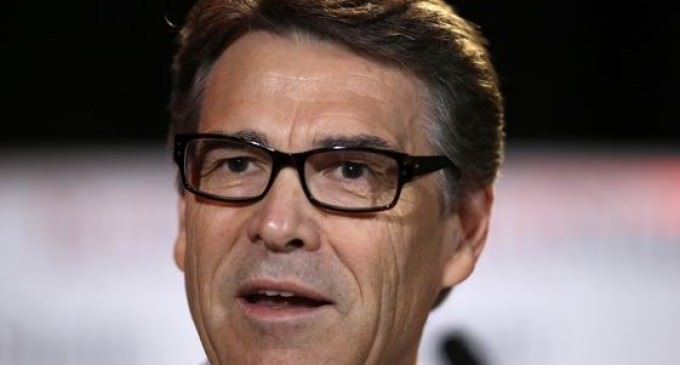 Texas Gov Rick Perry was indicted on 2 felony charges for refusing to fund the office of the Travis County DA Rosemary Lehmberg, who has pleaded guilty to DUI charges and who Perry wants removed from office.

Lehmberg drove drunk, threatened and spat on police and had to be retrained by jailers, yet refuses to step down from office.

“The Texas Constitution gives the governor the power to veto legislation, and a criminal indictment predicated on the exercise of his constitutional authority is, on its face, highly suspect, ” stated Louisiana Gov. Bobby Jindal.

Texas Gov. Rick Perry said Sunday that his indictment on abuse of power and coercion charges is just the latest example of “out of control” government at all levels, comparing the case with the Obama administration’s failure to secure the U.S. border and the IRS’s targeting of conservative groups.

Appearing on “Fox News Sunday,” Mr. Perry, a Republican eyeing a second run for president in 2016, said the people of his state and all across the nation desperately want government officials to return to doing their jobs, enforcing the law and not overstepping their boundaries.

“We’re not securing the border as the Constitution calls for us to. When you add the IRS scandal that’s going on and the outside the rule of law there and then you look at what happened in Austin, Texas, with this grand jury, I think there is some extraordinary concern in this country about the rule of law not being followed and too many things are being decided in arenas that shouldn’t be decided from the standpoint of a government that’s out of control,” Mr. Perry said.

“People want to get back to the rule of law and knowing with certainty that our border is going to be secure, that the IRS is not going to come knocking on their door looking for things and that the NSA is not listening in on our phone conversations,” he said.

Mr. Perry was indicted on two felony counts last week for making good on a threat to veto $7.5 million in state funds from a District Attorney Rosemary Lehmberg, who was arrested last year for drunk driving.

Having lost faith in Ms. Lehmberg, the governor said he stands by his actions.

“If I had to do it again I would make exactly the same decision,” he said.