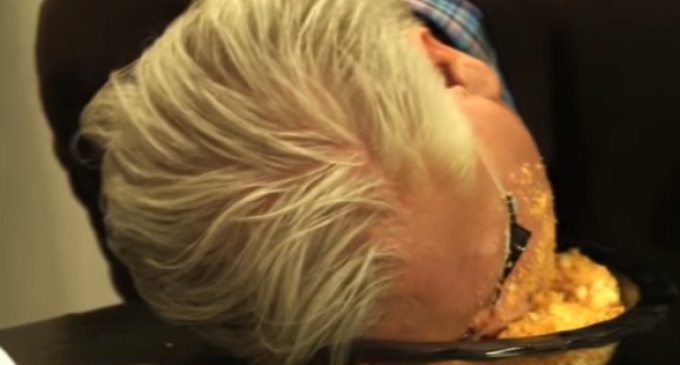 It's become difficult to find a joke about Donald Trump that has yet to be made. Instead of listening to what the man says, he's been mocked and jabbed at by regular folks, politicians, and the media as a whole. While some of those people feel entitled to their jokes, and they might very well be, some of them have no room to be making fun of anybody for being obnoxious, like Glenn Beck for example.

While he's still fairly loved by many Conservatives, his failing media empire has supported a great deal theories and stories that stampeded well beyond the realm of outrageous and fringe. So, naturally, when he donned swim goggles and rubbed his face in a bowl of crushed Cheetos, viewers weren't so much laughing with him as they were laughing at him. Apparently, after seeing Donald Trump on television, they thought that wearing swim goggles and sticking their faces in crushed Cheetos, they would look like Donald Trump.