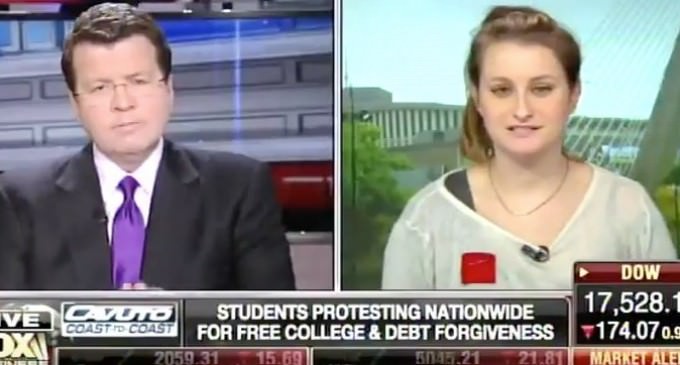 The Million Student March's national organizer, Keely Mullen, might want to take an economics course or even how to reconcile a checkbook, before pursuing her dream of teaching.  She told Cavuto on Coast to Coast that the MSM's demand free public college, a cancellation of student debt and a $15 an hour minimum wage for people who work on campus.  When pushed by Cavuto as to who would pay for these demands, she responded the 1%.

Again Cavuto shared the reality of those in the one-percent with Keely, that their taxes are “pushing fifty-percent” and asked her, “How much higher did she think, how much more do you think they should pay?”

Her response, again utterly telling on her lack of economic understanding, said, “I think enough to where one in two American families are not threatened by poverty.”

Keely's ignorance seems to be an epidemic with progressives as they scream for all things to be free for those they deem deserving at the expense of those who they think have made enough.  One page two, read the dialogue between Cavuto and Keely.