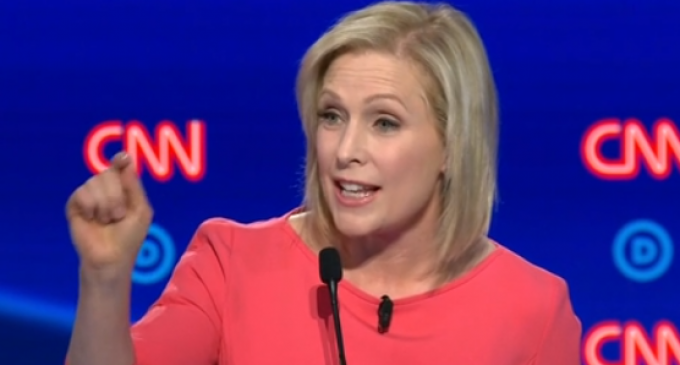 During the Democrat presidential primary debate hosted in Detriot, Michigan on Wednesday, Sen. Kirsten Gillibrand (D-NY) went on a rant about white privilege, claiming that ‘white privilege’ keeps white people from being shot.

“I don’t believe that is the responsibility of Cory and Kamala to be the only voice that takes on these issues of institutional racism,” Gillibrand said. “I think, as a white woman of privilege, who is a U.S. senator running for president of the United States, it is also my responsibility to lift up those voices that aren’t being listened to.”

She attempted to rationalize her being a white candidate by saying that she would use her ‘privilege’ to educate white suburban women who support President Trump as to what ‘white privilege’ is.

“I can talk to those white women in the suburbs that voted for Trump and explain to them what white privilege actually is,” Gillibrand continued.

She then put forth an idea as to what this education would look like.

“When their son is walking down a street with a bag of M&M’s in his pocket, wearing a hoodie, his whiteness is what protects him from not being shot,” Gillibrand claimed. “When their child has a car that breaks down and he knocks on someone’s door for help and the door opens and help is given, it’s his whiteness that protects him from not being shot.”

“That is what white privilege is today,” Gillibrand added.