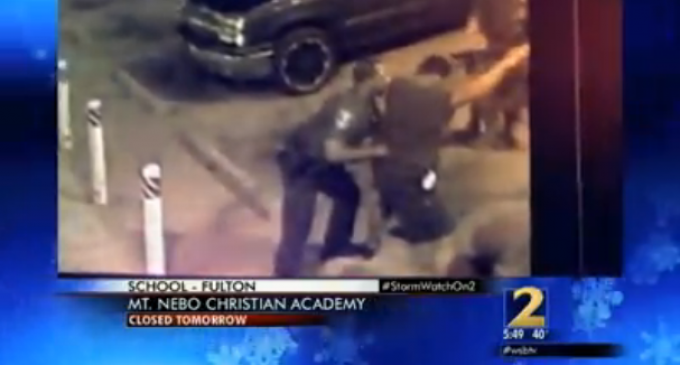 These illegal searches and assaults are happening in broad daylight, with victims being exposed to passers-by.

And the problem isn't just one cop, it's been discovered to be a ‘unit wide' problem.

Just look at some of these statements by victims that have come forward:

“He was like, ‘Just unbuckle all your clothes,' and put his hands down inside my pants”
“It's just embarrassing. I've got everybody seeing me exposed”
“He went inside my underwear and searched my g*nital area”
“He was all touching my bre*st, up in my v*gina area,” “He actually stuck his hand up in between my butt*cks.”

Officers are supposed to pull drivers over for traffic violations, but a Channel 2 Action News investigation found traffic stops leading to a violation of another kind.

Driver after driver told investigative reporter Jodie Fleischer officers searched inside their pants while they were stopped for minor traffic violations. In several cases, the invasive searches targeted passengers who were riding in the car.

“He was like, ‘Just unbuckle all your clothes,' and put his hands down inside my pants,” said Terry Phillips.

Forest Park police had pulled over Phillips' wife for a suspended registration.

Phillips consented to a search. However on the officer's dashboard camera recording Phillips can clearly be heard protesting when he realized the extent of the officer's intentions.

Phillips filed a complaint with the Forest Park Police Department and hired an attorney.

“That's a general strip-search, which you're not allowed to do,” said Phillips' attorney, Mark Bullman. “Unless it's an emergency or it's done in a controlled environment by professional people were other people aren't there to look in a public setting.”

According to the U.S. Supreme Court, officers may pat down or frisk an individual only to determine whether the person is armed, if the officers feel threatened.

“If you pat the outside of someone's pants you can clearly identify whether or not somebody has a firearm or something of that nature,” Bullman said. “You can't be moving people's clothing and opening them, particularly in situations where there's not been a custodial arrest.”

Bullman told Fleischer these kinds of searches should happen in a jail or hospital, not in public, and should ideally be done by an officer of the same sex.

Channel 2 obtained internal Forest Park police records showing that a captain noted a unit-wide problem with violating search policies six months prior to the Phillips traffic stop. The Forest Park police chief says he has now “ramped up training in this area.”

“It's just embarrassing. I've got everybody seeing me exposed,” said Alphonzo Eleby of his similar encounter with DeKalb Police.

Eleby had stopped at a gas station, parked his car at the pump, and run into the store for a money order. As he exited, he stopped to say hello to an acquaintance parked outside.

“There was just basically no reason for the search, but I still allowed them to search me because I had nothing to hide,” Eleby told Fleischer.

He said an officer walked him through the parking lot with his belt open and underwear exposed. He says the officer then reached into the front of his pants with his bare hand.

“He went inside my underwear and searched my genital area,” Eleby said, “It was just embarrassing.”

That officer found nothing on Eleby, but charged him with possession of marijuana anyway; his report alleges he saw Eleby throw something to the ground.

But a convenience store video shows Eleby's hands did not move, and the officer appears to toss something to the ground. The DeKalb County Solicitor dropped the charge against Eleby and forwarded the case to the district attorney to investigate the officer.

The DeKalb police chief placed him on restricted duty.

Cobb County police are investigating an officer's actions after truck driver Camishi Jones filed a complaint regarding her traffic stop.

“He was all touching my breast, up in my vagina area,” Jones said. “He actually stuck his hand up in between my buttocks.”

Jones was pulled over on Interstate 75 for driving her truck in the left lane. She said the male officer did not reach inside her clothing, but said the search made her feel violated.

“I felt that I was being molested with his hands,” Jones said.

The officer wrote in his report that he “conducted a pat-down checking for weapons.”

Fleischer's research found at least half a dozen reports of similar actions by officers in various metro area departments. The drivers and passengers were reluctant to speak publicly because they were embarrassed.

“The law itself as to whether or not you can strip someone in public for the purposes of searching them is very clear: it should never happen,” said attorney Brian Spears.

Spears represents Ben Kassars, a passenger whose roommate was pulled over by a drug task force in Baldwin County.

“I was humiliated… They took my belt off, unzipped my pants,” Kassars said.

Nearly 300 cars passed by as officers searched them for drugs. Kassars consented to the search after being placed in handcuffs and threatened with jail.

“They looked in my pants on the front, the side, the back. It was terrible,” Kassars said. “I felt like a girl. I felt defenseless. I felt like there was nothing I could do about it.”

Nothing was found in the search, and the men were allowed to leave with a ticket for following too closely, which a court later dismissed.

“I've seen drugs concealed on people everywhere so we are going to try and pat them down first, for weapons, and then, if permission granted, we're going to search further,” said Wesley Nunn, the commander of the drug task force who searched Kassars.

Nunn said his cases are different than a regular traffic stop. In this one, an informant had offered a tip that Kassars and his roommate were carrying drugs. He believes that gave him probable cause, plus Kassars agreed to allow it.

“I've been turned down many times on searches. You can't search, get a search warrant,” said Nunn.

He added that if Kassars hadn't consented, he probably would have taken him into custody to search him at the jail.

None of the searches in this story yielded any drugs. All of these drivers and passengers have filed complaints with police or are seeking legal action.

“If I go somewhere and I grab a person and grope or I search them in their private areas, I'm going to jail,” Eleby said, “What makes him above the law?”