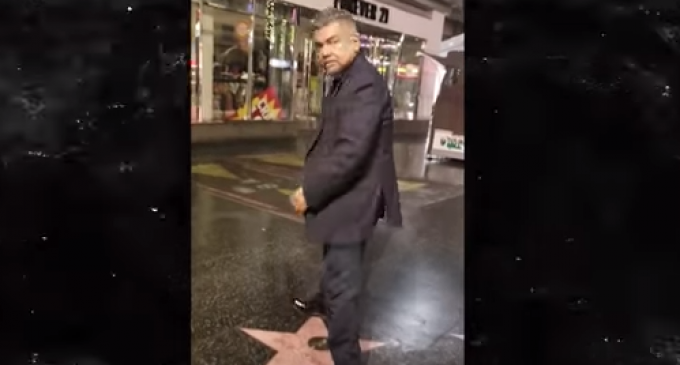 Comedian and former TV host George Lopez was recently seen in a TMZ video emptying a small water bottle from his crotch onto President Trump’s star on the Hollywood Walk of Fame, an act intended to stimulate urination.

After Trump became the GOP nominee for president, Lopez promised to leave the country and take all other Hispanics with him should Trump win. “If he wins, he won’t have to worry about immigration. We’ll all go back,” Lopez told TMZ. He also tweeted a photo of drug lord El Chapo holding up Trump’s severed head. One could only wish that Lopez was a man of his word.

“Hispanic police officer along with my wife, I have served 16 years, my wife 10. I have a younger sister half Hispanic and black and she served 7 as a police officer,” the man wrote. “I paid to meet you two years ago at the Majestic Theater in San Antonia. I remember being excited in getting to meeting a Hispanio I was proud of. You found out my wife and I were police, joked by assuming position against the wall. We were escorted out, my sister was in line behind us kept quiet after a comment was made when my wife and I left, about police.”

Turn the page to see Lopez’s video as well as the backlash he is now facing.