Of course, this is still sharply divided between Democrats and Republicans.

How anyone can feel that we need more gun control in this self-evident assault on our freedoms by our government and with the overwhelming evidence that gun control does nothing but raise crime statistics is amazing.

Can the blind ever learn to see?

A recently released Gallup Poll showed that public support for gun control has waned since the mass shooting at Sandy Hook Elementary School in Newtown, Connecticut.

According to the Poll, which surveyed 1,028 adults, aged 18 and older, on Oct. 3 to 6 via the telephone, about half (49 percent) of Americans believe that laws covering the sale of firearms should be made more strict while the other half believes gun laws should be kept as they are now (37 percent) or made less strict (13 percent).

Immediately following Sandy Hook support for tougher gun laws spiked at 58 percent, the highest it had been since 2004 when it reached 60 percent, according to Gallup’s tracking. 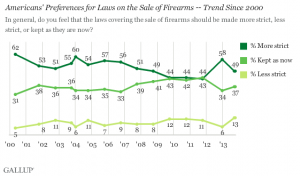 Meanwhile, a majority of Americans — approximately three out of four — oppose a ban on the possession of handguns for everyone who is not a police officer or “authorized person.” As indicated by the chart below, that 74 percent figure is the all-time high for opposition to banning handguns. 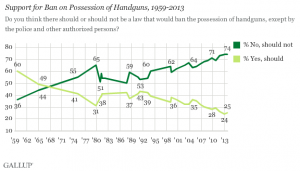