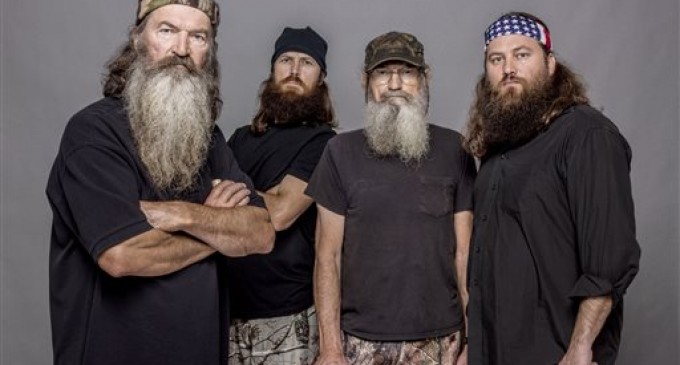 After Duck Dynasty’s Phil Robertson was suspended from A&E for vocalizing his beliefs on homosexuality in an interview with GQ magazine, hundreds of thousands of fans gather in his corner.

The administrator the Facebook page “Boycott A&E Until Phil Robertson Is Put Back On Duck Dynasty” was suspended because the page gathered too many likes too quickly: The page hit 200,000 likes within the first 6 hours and 700,000 in just 20 hours. As of this writing, it is about to break 1.5 million likes.

We’re placing our bets on the rights of free speech and the ability for people to rally when they find a passionate cause.

When the A&E network suspended “Duck Dynasty” patriarch Phil Robertson for disparaging gay people, it may have followed a time-honored TV tradition of quickly silencing a star who, for better or worse, speaks his mind. But in doing so it also ruffled the feathers of possibly millions of fans of its most popular show.

Fourteen hours after it was learned that Robertson had been placed on indefinite “hiatus” for telling GQ magazine, among other things, that gays are headed to hell, more than a half-million people liked an impromptu Facebook page demanding the show be boycotted until he returns.

Former Alaska Gov. Sarah Palin, who had her picture taken with Robertson just last month, complained that his free-speech rights were being trampled. Bobby Jindal, governor of the state of Louisiana, where the show is filmed, complained that Miley Cyrus got a pass for twerking on TV while Phil got shown the door.

T-shirts, of course, went on the market with the words “I Don’t Give a Duck About A or E, Bring Back Phil.”

“It’s a show that is promoting clean living and good moral values, and that’s something we need more of today,” one of the program’s many fans, Rick Peter of Vernon, British Columbia, Canada, told The Associated Press.

It’s also a show that 67-year-old Robertson, who sports a beard that seemingly should qualify him for immediate membership in the rock group ZZ Top, is at the center of.

When or if he’ll return _ or if he’ll ever really go away, however _ is an open question.

“Duck Dynasty” is on hiatus until Jan. 15, and a network spokesman said Thursday that nine of next season’s 10 episodes have already been filmed. That means Robertson likely isn’t needed in front of the camera before next March, by which time this whole crisis may have blown over.

And blow over it will, eventually, says veteran Hollywood crisis publicist Howard Bragman, who added that Robertson will likely return to the show as well, perhaps after making a heartfelt apology.

“There’s too much money at stake,” said Bragman, vice president of reputation.com. “Although he plays kind of a hick on TV, I don’t think he’s dumb. I think he gets what’s at stake here. And I hope people on his team, the network and his producers get the message that what he did was wrong. “

One million people have now liked the “Boycott A&E Until Phil Robertson Is Put Back On Duck Dynasty” Facebook page.

“This page is to show support for the freedom of speech of Americans. Unless Phil is reinstated to the show, we refuse to watch the A&E Channel!”

The page broke 200,000 likes within the first 6 hours and 700,000 in just 20 hours.  Currently there are 1.3 million “Likes”.  The page administrator was allegedly rewarded for his success with a suspension from Facebook for getting too many “Likes” in a one hour period.  Say what?  That’s weird even for Facebook.

“The administrator of this page was banned for next 12 hours because this page generated 4.5K likes in ‘1 hour.’ People you are getting the word out! Continue to spread that we will boycott A&E until Phil Robertson is put back Duck Dynasty.”

Here is the statement by A&E that set the whole thing off:

“We are extremely disappointed to have read Phil Robertson’s comments in GQ, which are based on his own personal beliefs and are not reflected in the series ‘Duck Dynasty.’ His personal views in no way reflect those of A+E Networks, who have always been strong supporters and champions of the LGBT community. The network has placed Phil under hiatus from filming indefinitely.”