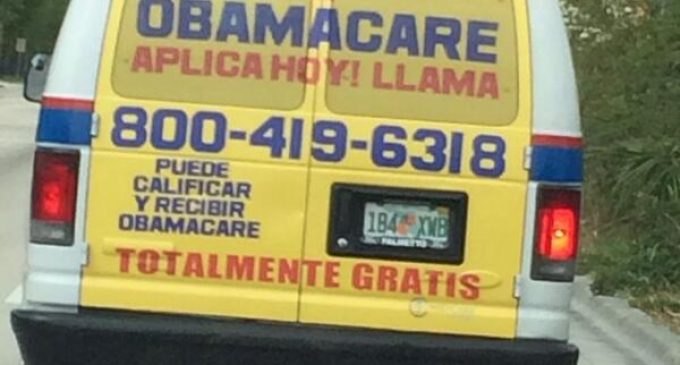 Meanwhile, Matt Drudge tweeted a picture (below) of one of the vans cruising the Miami streets offering “Free Obamacare”

In an interview with Univision Deportes, a Spanish-language sports radio show, Obama said immigration officials won’t have access to the personal information that consumers provide when signing up for healthcare on the new exchanges.

“Well, the main thing for people to know is that any information you get, you know, asked with respect to buying insurance, does not have anything to do with … the rules governing immigration,” Obama said. “And you know, you can qualify if you’re a legal resident, if you are … legally present in the United States. You know, if you have a family where some people are citizens or legally here, and others are not documented, the immigration people will never get that information.”
The administration has made this point before, but Hispanics have been slow to enroll under ObamaCare, and some believe mixed-status families might be staying away from the exchanges out of fear it will jeopardize family members in the country illegally.

“You know, you will qualify, you know, regardless of what your family’s status is,” Obama said on Tuesday. “So, you know, people should not hold back just because they’re in a mixed-family status.”

The administration has focused on Hispanics in its final enrollment push through initiatives like the Latino Enrollment Week of Action, and in its partnership with Spanish-language media.

Obama’s Tuesday interview on a sports talk show also dovetails with the administration’s effort to leverage the popular NCAA basketball tournament to get its message out.

Under the license plate it says “totalmente gratis,” which means “totally free” in English.