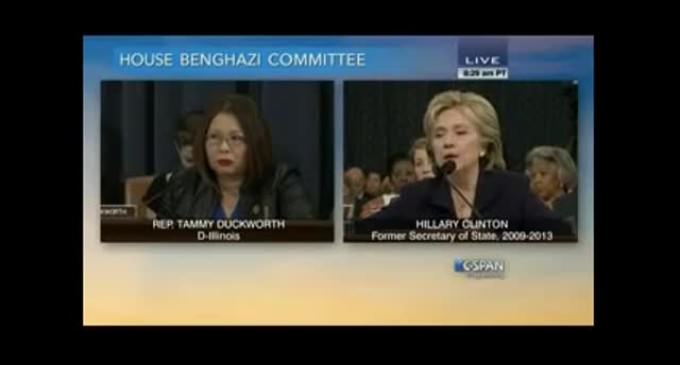 Hillary Clinton testified before the Benghazi Committee, in a marathon eleven hour session.  The Committee so divided on party lines, one felt they were watching two separate programs.  The Republicans, led by Trey Gowdy, the committee head, had reams of material to cover in questioning  the former Secretary of State.

And they painstakingly took their time trying to evoke Clinton to give up some nugget of truth.  Clinton, a lawyer herself, bobbed and evaded direct questions, and like a seasoned politician, answered questions with non answers, choosing to go onto some other subject.

The Democrats asked little questions, and when they did, it was a leading question. “Could you tell us about how you felt about Chris Stevens, Madame Secretary”, obviously a lead in for Clinton to attempt to muster up some fond anecdotes of Stevens.

One Democrat, who did give an attempt at some questioning, was Tammy Duckworth.  Probably not Duckworth's intention she opened a can of worms when asking Clinton about the marine presence at Embassies.