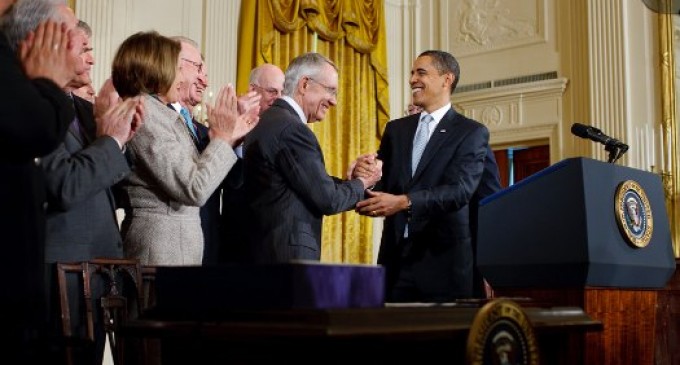 Did you get the title? It’s only the TOP TEN Constitutional violations committed by Obama, according to Forbes.

There are many missing violations (that we know about), but as this Forbes writer indicates, the violations surrounding Obamacare alone could fill the list.

The fact that we even see such a write-up in a major publication is mind blowing.

But add to that the fact that all branches of government just sit on the sidelines and let’s it all happen in broad daylight truly boggles the mind and show us how far down the road we are to losing our country!

One of Barack Obama’s chief accomplishments has been to return the Constitution to a central place in our public discourse.

Unfortunately, the president fomented this upswing in civic interest not by talking up the constitutional aspects of his policy agenda, but by blatantly violating the strictures of our founding document. And he’s been most frustrated with the separation of powers, which doesn’t allow him to “fundamentally transform” the country without congressional acquiescence.

But that hasn’t stopped him. In its first term, the Administration launched a “We Can’t Wait” initiative, with senior aide Dan Pfeiffer explaining that “when Congress won’t act, this president will.” And earlier this year, President Obama said in announcing his new economic plans that “I will not allow gridlock, or inaction, or willful indifference to get in our way.”

And so, as we reach the end of another year of political strife that’s fundamentally based on clashing views on the role of government in society, I thought I’d update a list I made two years ago and hereby present President Obama’s top 10 constitutional violations of 2013.

1. Delay of Obamacare’s out-of-pocket caps. The Labor Department announced in February that it was delaying for a year the part of the healthcare law that limits how much people have to spend on their own insurance. This may have been sensible—insurers and employers need time to comply with rapidly changing regulations—but changing the law requires actual legislation.

2. Delay of Obamacare’s employer mandate. The administration announced via blogpost on the eve of the July 4 holiday that it was delaying the requirement that employers of at least 50 people provide complying insurance or pay a fine. This time it did cite statutory authority, but the cited provisions allow the delay of certain reporting requirements, not of the mandate itself.

3. Delay of Obamacare’s insurance requirements. The famous pledge that “if you like your plan, you can keep it” backfired when insurance companies started cancelling millions of plans that didn’t comply with Obamacare’s requirements. President Obama called a press conference last month to proclaim that people could continue buying non-complying plans in 2014—despite Obamacare’s explicit language to the contrary. He then refused to consider a House-passed bill that would’ve made this action legal.

4. Exemption of Congress from Obamacare. A little-known part of Obamacare requires Congressmen and their staff to get insurance through the new healthcare exchanges, rather than a taxpayer-funded program. In the quiet of August, President Obama directed the Office of Personnel Management to interpret the law to maintain the generous congressional benefits.

5. Expansion of the employer mandate penalty through IRS regulation. Obamacare grants tax credits to people whose employers don’t provide coverage if they buy a plan “through an Exchange established by the State”—and then fines employers for each employee receiving such a subsidy. No tax credits are authorized for residents of states where the exchanges are established by the federal government, as an incentive for states to create exchanges themselves. Because so few (16) states did, however, the IRS issued a rule ignoring that plain text and allowed subsidies (and commensurate fines) for plans coming from “a State Exchange, regional Exchange, subsidiary Exchange, and federally-facilitated Exchange.”

6. Political profiling by the IRS. After seeing a rise in the number of applications for tax-exempt status, the IRS in 2010 compiled a “be on the lookout” (“BOLO”) list to identify organizations engaged in political activities. The list included words such as “Tea Party,” “Patriots,” and “Israel”; subjects such as government spending, debt, or taxes; and activities such as criticizing the government, educating about the Constitution, or challenging Obamacare. The targeting continued through May of this year.

7. Outlandish Supreme Court arguments. Between January 2012 and June 2013, the Supreme Court unanimously rejected the Justice Department’s extreme positions 9 times. The cases ranged from criminal procedure to property rights, religious liberty to immigration, securities regulation to tax law. They had nothing in common other than the government’s view that federal power is virtually unlimited. As a comparison, in the entire Bush and Clinton presidencies, the government suffered 15 and 23 unanimous rulings, respectively.

8. Recess appointments. Last year, President Obama appointed three members of the National Labor Relations Board, as well as the head of the Consumer Financial Protection Bureau, during what he considered to be a Senate recess. But the Senate was still holding “pro forma” sessions every three days—a technique developed by Sen. Harry Reid to thwart Bush recess appointments. (Meanwhile, the Dodd-Frank Act, which created the CFPB, provides that authority remains with the Treasury Secretary until a director is “confirmed by the Senate.”) In January, the D.C. Circuit held the NLRB appointments to be unconstitutional, which ruling White House spokesman Jay Carney said only applied to “one court, one case, one company.”

9. Assault on free speech and due process on college campuses. Responding to complaints about the University of Montana’s handling of sexual assault claims, the Department of Education’s Office of Civil Rights, in conjunction with the Justice Department, sent the university a letter intended as a national “blueprint” for tackling sexual harassment. The letter urges a crackdown on “unwelcome” speech and requires complaints to be heard in quasi-judicial procedures that deny legal representation, encourage punishment before trial, and convict based on a mere “more likely than not” standard.

10. Mini-DREAM Act. Congress has shamelessly failed to pass any sort of immigration reform, including for the most sympathetic victims of the current non-system, young people who were brought into the country illegally as children. Nonetheless, President Obama, contradicting his own previous statements claiming to lack authority, directed the Department of Homeland Security to issue work and residence permits to the so-called Dreamers. The executive branch undoubtedly has discretion regarding enforcement priorities, but granting de facto green cards goes beyond a decision to defer deportation in certain cases.

It was hard to limit myself to 10 items, of course—Obamacare alone could’ve filled many such lists—but these, in my judgment, represent the chief executive’s biggest dereliction this year of his duty to “preserve, protect, and defend” the Constitution, and to “take care that the law be faithfully executed.”