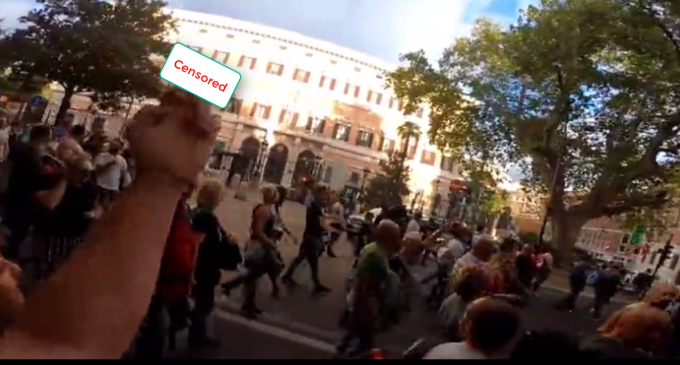 For weeks, chants of “F*ck Joe Biden” have filled stadiums across the U.S. But just as it seemed to become a national theme at sporting events, it was replaced by “Let's go, Brandon” on October 9, when NASCAR driver Brandon Brown, who had won his first race in the league's Xfinity series at Alabama's legendary Talladega Superspeedway, was being interviewed by NBC Sports reporter Kelli Stavast.

During the interview, the crowd broke off into the familiar “F*ck Joe Biden” theme, but Stavast ‘reinterpreted' the chant for the TV audience as “Let's go, Brandon.” Her gift to the country perfectly coupled the sentiment so many Americans feel about the vegetable in the White House with the fake news spin on America's most tragic president and his anti-America agenda.

How long will this take this new chant to reach Europe? We've recently seen both Hillary Clinton and Nancy Pelosi brutally heckled in Ireland and England.

Here's Hillary being called a criminal by an angry crowd outside Queens University in Belfast:

They won’t be able to walk down the street…

Hillary being booed and called a criminal over and over again outside Queens University. pic.twitter.com/kAF6PHJOY1

And Pelosi being heckled in Northern England. The crowd can be heard shouting things like, “You’re Not Welcome Here, Nancy!”, “The Whole World Knows That Trump Won the 2020 election!”

As an accomplished musician with a Bachelor of Music in Theory and Composition, and freedom-loving patriot, I think I'm qualified to say that both those videos reach the aesthetic level of being utterly symphonic! At least, I have the same feeling hearing them as I do any one of Beethoven's odd-numbered symphonies.

Moving on to Rome…turn the page to hear protestors lighting up the U.S. embassy with the same sounding choral triumph.